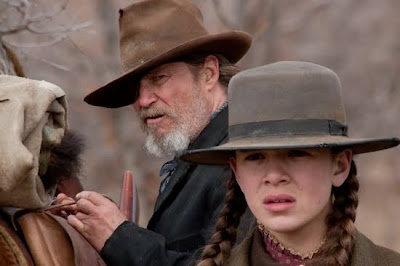 In the late 1800's the voice of Mattie Ross reflects back to the time when she was 14 a drifter named Tom Chaney shot her father to death after a bar room brawl. The strong willed independent young woman travels from the family farm in west center Arkansas to Fort Smith to claim her father's body and hire someone to bring Chaney to justice.

Hailee Steinfeld as Mattie Ross is a more believable as a young teen than the 22 year old Kim Darby of the 1969 version of the movie. Hailee looks the age and has the necessary straightforward manner that comes as a surprise to those who encounter her Mattie Ross. After arranging for the shipping home of her father's body, she barters for the money back for the horses that her father had purchased with some canny horse tradeing. With the cash she seeks out a US Marshall to go after Chaney (Josh Brolin). After hearing the qualifications of the men she selects Rooster Cogburn (Jeff Bridges) an aging one eyed whiskey drinker who has a reputation to shoot first and ask questions later because he seems to have “true grit”. Cogburn needs the money and teams up with Texas Ranger La Boeuf (Matt Damon) who is also tracking Chaney for shooting a senator and his dog, plus the reward money. They take off before Mattie can join them, but later let her be part of the posse when she proves her resourcefulness and tenacity. Cogburn and La Boeuf do not get along and there's a humorous exchange of banter between the two until La Boeuf finally gets too angry and leaves. Mattie and Cogburn continue to follow Chaney's trail who has joined up with the criminal “Lucky” Ned Pepper (Barry Pepper) and his gang in the Oklahoma Indian territory.

Jeff Bridges plays Cogburn as the barely intelligible hard drinking ornery Marshall chews the scenery with the best of them. Damon as La Boeuf (pronounced la Beef) adds a comic touch to self important Ranger who thinks everything they do in Texas is superior to the rest of the world. The writing/directing team of Ethan and Joel Coen prove once again their attention to the details in period pieces. The costumes, the props and location follow the 1968 novel by Charles Portis more closely including what happens to Mattie after the big adventure. The unique feature of the Coen production is the language which has the courtly cadence of a time store novel. Newcomer Hailee Steinfeld is brilliant as the precocious Mattie who is both child and grownup in her attitude as the oldest in the family taking care of business. Her moral righteousness does not turn away from the harsh reality of the violence that Cogburn brings down around them in their pursuit. In comparing the John Wayne version with Jeff Bridges is like apples and oranges. Both have powerful performances, and this new one is fortunately not saddled with a Glenn Campbell or Kim Darby.
(Review by reesa)