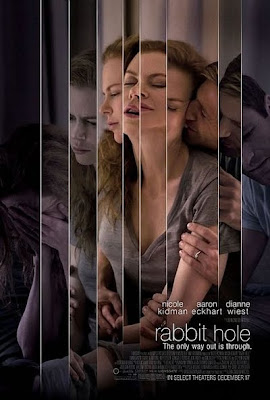 Eight months after Becca and Howie lost their young child in a car accident they are living like the walking wounded. They function with the daily routine of living and no one is talking about the elephant in the room. In fact Becca begins to erase all evidence of her son but removing his drawings from the refrigerator and packing up his clothing. Howie sits alone in a room watching a video of his son as the child's voice echoes like a ghost through the house.

Statistics show that many couples who suffer the death of their child often end up getting divorced. You can see it brewing between Becca and Howie (Nicole Kidman and Aaron Eckhart) as their communication is polite and perfunctory. Each holding back the wave of emotion that threatens to burst. We watch as they press the boundaries of who they were before to who they are becoming now. Their friends, family and neighbors try to break through but Becca has build an uncomfortable wall around her that she paints with a smile while her eyes say “not ready”. Becca spends her days baking pies and cakes while Howie goes to work as a suited executive. He may play racket ball with his friend, but his wife and Becca's best friend is too afraid to call her. Becca learns that her irresponsible sister Izzy (Tammy Blanchard) is pregnant and was afraid of telling her. Although Becca claims she is alright with this they attend a grief support group with other parents of children who have died. This has the best scene in the movie which is also in the trailer. It shows the spark of personality, wit and edge that Becca may have had before the tragedy. The rest of the time they are sleep walking.

Becca sees the teenager that had fatally hit her son with his car. She begins to stalk him, watching him get off his school bus, picking up a book that he returned to the library and checking it out herself. Eventually they meet and they slowly confess their feeling of guilt and recrimination. Jason (Miles Teller) is creating a comic book where there are several dimensions existing side by side. Somewhere they are living lives that are happy, or sad, or completely different from what they are doing now. Becca finds some solace in this concept.

Director of the musical Hedwig and the Angry Inch John Cameron Mitchell and Pulitzer winning screenwriter David Lindsay adapted the stage play of the same name to a wider canvas on screen. They action in the play centers in the living room and kitchen. They movie may have opened the surrounding but the emotional turmoil keeps the film closed in. Kidman's tall angular Becca is almost saintlike in her portrayal, but her character is unlikable. You want to shake her awake and get on with her life. Eckhart feeling the frustration of trying to connect with his wife almost caves to having an affair. Dianne Wiest as Becca's mom Nat, is as usual worthy of a supporting nod as well as all the acting from the principals. With all this angst you would hope the cathartic moment of the movie would bring closure and resolution, but the director has kept everyone at arms length through the whole story, that by the time it comes, you don't care.
(Review by reesa)