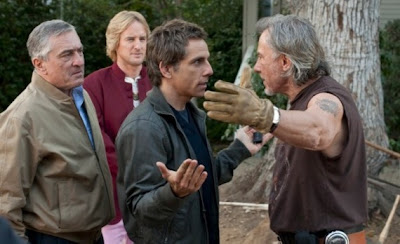 Ben Stiller once again reprises his role as Greg “Gay” Focker in the movie Little Fockers. True to form the movie is full of embarrassing scenarios and over the top mishaps that really can only ever happen to a character that Ben Stiller portrays. Incidentally, I actually feel embarrassed and upset by what happens to his roles. I guess it’s the way he portrays the characters. He gives off that everyman flair with almost cartoon-esque caricature. I find myself shielding my eyes when the eventualities beset him, mostly because if anything like that ever happened to me, I would probably go hole up somewhere and die. Not immediately of course, I would bring food and the hole would be close to a stable WIFI connection, but I digress.

The premise of this movie is simple. Get Greg Focker within earshot of Jack Byrnes (Robert De Niro) and you will have pure comedy silver. Basically, Jack is getting old and is a good panic attack away from a cardiac arrest. In the musings over his long family tradition he decides that since the guy he was going to hand over the reins to is a cheating jerk, Greg Focker would have to do. He would have to be the one who inherits the role of patriarch and successor to the Byrne clan legacy. Unfortunately Ben Stiller characters are cursed and that is much of the movies comedy right there. When you toss in Kevin Rawley (Owen Wilson) to mix it up with Greg’s wife Pam (Teri Polo) when his love life is called into question, you get a few more nostalgic chuckles as you wonder if that old relationship will take off and make Greg’s life even more entertaining. On top of that, you have Greg’s parents Bernie (Dustin Hoffman) and Roz (Barbra Streisand) showing you that, really, Greg never had a chance.
So those are all Meet the Parents alums, what is new you ask? Jessica Alba. She portrays Andi Garcia a drug sales rep. She didn’t have to say a single word and I would have paid for that ticket. (I didn’t)

Seriously she is freaking hot.

Oh, but the acting, well, if I am honest, she was alright. Jessica does bubbly well or at least I think she does it well, but that may be my genitals talking. Acting in this movie was actually its strong suit. Robert De Niro is apparently so masterful an actor he doesn’t even have to try anymore he just exudes expertise and command. I recognized his face and pointed and said “Hey, De Niro” and all that, but as soon as he started talking I remembered Jack Byrnes and forgot he was acting. Ben Stiller had that effect too, but I think it was more that he mostly plays the same character anyways and it happens to be Greg Focker. I wanted to punch Dustin Hoffman’s Bernie over and over in the face till failure, so I guess that is a credit to him too.  Don’t get me started on Barbra’s Roz. I feel bad for Greg Focker, I’ll leave it at that.
All in all, I enjoyed this movie. The laughs are as frequent as they are intense and the story flowed well.