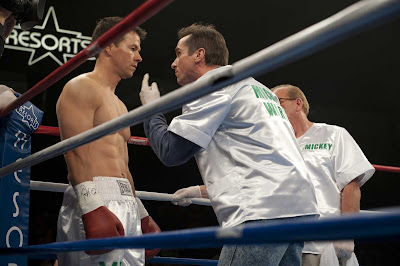 Northwest of Boston in the blue collar community of Lowell, MA “The Pride of Lowell” fighter Dicky Ward knocked down the world champion Sugar Ray Leonard. Having lost the fight, Dicky fell on hard times and drug abuse. His younger brother Mickey has become the family's hope for a champion but he continues to lose under his mother's management and his unreliable trainer Dicky. It takes his rock solid girlfriend Charlene to help him break away from his dysfunctional family and earn a shot as the World Champion.

Director David O. Russel takes on the bio pic of real life fighter “Irish” Mickey Ward who was three times a New England Golden Gloves winner and turned pro in 1985. After losing four punishing fights, the last almost killing him, he took a hiatus while he worked on a street paving crew to afford the surgery on his right hand after an altercation with the police arrested his brother. Mark Wahlberg trained for four years and was friends with Ward as both men came from working class neighborhoods. Christian Bale lost weight to play Dicky Eklund the troubled brother. Their tough as nails mother is played by Melissa Leo. Amy Adams went against type as the sexy waitress Charlene.

An HBO crew making a documentary on crack use follows Dicky around his drug house, and while training his brother. Dicky thinks they are filming him because he's going to have a possible comeback after he knocked down Sugar Ray Leonard 10 years before. Dicky is proud of his brother, but can never seem to show up on time to train him. His money grubbing monster mother/manager sets up fights for him as a “stepping stone”...the person put into fights so that another fighter can advance. The fighter that Mickey trained to face has the flu and is replaced by a guy who is 20 lbs heavier and Mickey takes a beating. Everyone knows he shouldn't have taken the fight, but the family would not have been paid if he bowed out. A promoter from Las Vegas thinks he shows heart and promise offers him the chance to train all year but he has to get rid of his brother and mother. Mickey would rather quit the game because the prospect of telling his family fills him with dread. It isn't until he meets Charlene the sweet but tough bartender who his seven trashy sisters call an “MTV girl” because she went to college. She motivates him to take control of his career. The family guilts him into one more fight, but a few days before his brother gets into a brawl with the local cops who end up breaking Mickey's hand. With Dicky in prison, drying out from his addiction, Mickey manages to get new trainers and investors. He begins to win the next few fights leading him to a chance for a world championship. Even with everything that he's accomplished he still wants his brother. Despite his foibles Dicky knows the fight game and Mickey wants his big brother at his side.

Director David O. Russell shoots the boxing scenes as the rough and brutal sport that it is. There's no flashy cuts or jerky camera shots as the competitors plummet each other. This is basically a hero rising to the occasion tale and you know from the start that he will win at the feel good end. The journey to that point turns in strong fascinating performances by Wahlberg, Leo, Adams and most notably Christian Bale as the egocentric happy go lucky motor mouthed train wreck. It's interesting at the end with the credits we get to see the real brothers and you can see how Bale captured Dicky spot on. The Fighter will probably be in the top 10 of sporting movies about boxing. And if Bale does not take home the golden statue this year it will be a wicked freakin' crime.
(Review by reesa)

Email ThisBlogThis!Share to TwitterShare to FacebookShare to Pinterest
Labels: The Fighter review