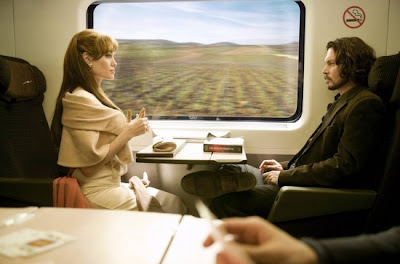 A beautiful woman walks down the street in Paris. She is being observed by Interpol agents of which she seems to be aware but is ignoring them. After she orders her usual breakfast at an outside cafe, she receives a courier message that tells her to take a train and find someone of the writer's build and size. On the train she selects a vacationing American. This leads the agents to believe that he is Alexander Pearce, the man who stole $744 million from a well known gangster.

Harking back to the heyday of Cary Grant and Eve St.Marie where the glamorous Hollywood actors traipsed about Europe with style and panache, director Florian Henckel von Donnersmarck skims the surface of this genre without quite the class. Postcard pretty, but the message is just “having a good time wish you were here”. Angelina Jolie dressed to the nines as the mysterious Elise Ward rocking the hour glass gowns is too skinny to be a seductive as Gina Lollabrigida or Sophia Loren. She flaunts an English accent while playing word games with the baffled bearded Johnny Depp as Frank Tupelo an American tourist who is traveling alone reading spy novels. Their chemistry is acceptable with the suggestive glances and coy one liners. The action moves quickly enough that you ignore the plot holes while you enjoy the “A” listers doing what they do best.

Paul Bettany is Acheson the Interpol agent that is obsessed with finding Alexander Pearce. They have been following Elise for some time hoping she would lead them to her former lover. They are confused when they run face recognition on Frank and discover he's just a math teacher from the midwest but they use him just the same to see what Elise is planning. Elise takes Frank to her hotel and after a fancy dinner makes him sleep on the couch. He awakens to find her gone and Russian hit men have invaded the room trying to kill him. Alexander was once the private banker of Ivan Demidov (Steven Berkoff) who sent his henchmen to capture who they think may be the man who had embezzled his fortune. On top of that you have Rufus Sewell roaming around looking debonair and suspicious.

There's a chase on the rooftops with Depp in his jammies. There's kind of a chase in the Venice canals in boats while the bad guys catch up with them after chasing them from the streets. There doesn't seem to be any sense of mortal danger in any of the action scenes. No dark intrigue. Based on the French thriller “ Anthony Zimmer”, writers Henckel von Donnersmarck, Christopher McQuarrie and Jilian Fellowes seem to have taken out the psychological drama parts and replaced it with a travelogue for Europe. As long as you don't think so closely to the plot it's a nice escape with fabulous hotels, clothing, jewelery, and actors.
(Review by reesa)

Posted by Dallas Movie Screenings at 12:50 AM

Email ThisBlogThis!Share to TwitterShare to FacebookShare to Pinterest
Labels: The Tourist review