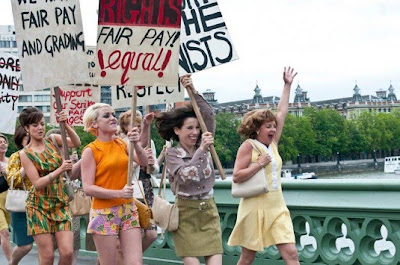 In 1968 the Ford sewing machinists went on strike for a day at the Ford Dagenham assembly plant in England tor protest against the issue of being down graded to non skilled worker status. The walk out eventually escalated and was instrumental in the 1970 Equal Pay Act. Director Nigel Cole (Calendar Girls and Saving Grace) with writer William Ivory tells the story of 187 women who sewed car seat covers and took a stand that changed the world.

Sally Hawkins of Happy Go Lucky plays Rita O'Grady a wife and mother who becomes the unlikely voice of the sweatshop workers at the Dagenham plant after their request for a pay raise finds them reclassified as “unskilled” by their greedy bosses. Their Union rep Albert Passingham (Bob Hoskins) urges Rita to stand up (flash to Sally Field in Norma Rae). Women had never went on strike before, and they are at first excited and psyched at the prospect of getting their voices heard. Plucky Rita realizes that nothing will change until issue of equal pay for equal work is solved. Her husband Eddy (Daniel Mays) who is proud of his wife at first is having trouble with the empowered Rita. Not only is Rita busy with a new limelight for her efforts, the strike has put a pinch on their finances and Eddy is unhappy with taking up the slack cooking and cleaning. Most of the blustering male cast from Ford's head of industrial relations Peter Hopkins (Rupert Graves) and the patronizing chief union representative Monty Taylor (Kenneth Cransham) do not fare well. The men look confused and overwhelmed by women who speak their mind and don't back down. Rita bonds with Lisa Hopkins (Rosamund Pike) the wife of the Ford negotiator and encourages her in her struggle. She was once a scholar and is frustrated by the way her husband treats her like she doesn't have a thought of her own. Miranda Richardson really shines as the newly appointed government minister Barbara Castle who eventually helps Rita and her workers make the first step.

The film is interspersed with footage from those times including interviews with the actual strikers in 1968. The music, the fashion, the set decoration are detailed and retro. The accents take a moment to understand especially when everyone is talking at once. Sally Hawkins does a wonderful job as the natural and reluctant leader who finds herself articulate when standing up for what she believes as just. Look for Andrew Lincoln of the Walking Dead in a brief role as the abusive school teacher Mr. Clark. Contemporary young women take for granted the status that they enjoy today that was unthinkable just a few short decades ago. We've come a long way, baby.
(Review by reesa)

Posted by Dallas Movie Screenings at 12:55 AM

Email ThisBlogThis!Share to TwitterShare to FacebookShare to Pinterest
Labels: Made in Dagenham review