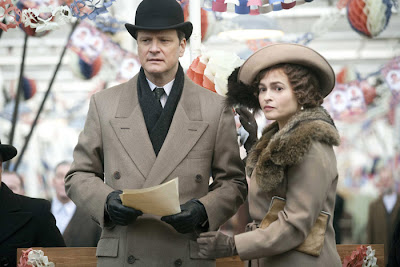 Sometimes I stammer and stutter during a conversation, thinking of the next words that will come out of my mouth. This is just a temporary setback because I get my thoughts in order and the conversation continues.

Unfortunately, for The Duke of York, the man born Albert Frederick Arthur George (Colin Firth), this was not the case. Having suffered a stammer since childhood, due from constantly being ignored by his father and picked on by his older brother Edward (Guy Pearce), the future King George VI must experience yet another public speaking engagement as all eyes and ears are upon him. His supportive wife, Elizabeth (Helena Bonham Carter), after many attempts to find a doctor to cure her husband of his stammering, hires an Australian speech therapist, Lionel Logue (Geoffrey Rush) to help. With such eccentric methods Lionel has of working with each patient, we can't help but laugh at some of his unorthodox ways of getting to the root of the problem, including screaming swear words while speaking or speaking live on the radio under blankets. Lionel refuses to call his patient by Your Highness or Your Majesty and instead insists on calling him by his family nickname, Bertie. In Lionel's world, there is no difference between royalty and commoners.

Radio is just coming into play at this time, so Albert finds himself having to make speeches to the masses as families gather around the radios listening to every word as if it were their last. The King struggles to overcome his speech defect in order to inform people there is a possibility of entering the war against Nazi Germany.

The story is inspiring as we witness the king overcoming obstacles, trying to have a conversation with those around him. From the first stammer to the last, we enter into the life of the future King George VI with the help of his therapist Logue. We feel for him as he struggles to utter words into the microphone that need to be said keeping the people informed of how the nation stands in regards to the war around them. If you know your history, you are aware of the outcome.

I expect either Colin Firth or Geoffrey Rush to stand in front of the Oscar's podium next year accepting his award for a job well done.

I give THE KING'S SPEECH fa-fa-four and a half stars.

See you at the movies. Raymond Garcia

Posted by Dallas Movie Screenings at 9:29 AM

Email ThisBlogThis!Share to TwitterShare to FacebookShare to Pinterest
Labels: The King's Speech review