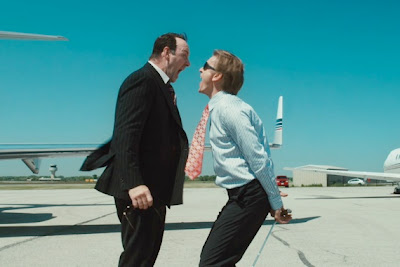 In 2006 the story broke all over the news of how Washington Super lobbyist Jack Abramoff was involved with corruption and scandal that led to the conviction of not only himself but nine other lobbyists and congressional staffers. The crimes related to the defrauding of American Indian tribes, fraudulent dealing with SunCruz Casino's and trading expensive trips, meals and gifts in exchange for political favors.

Kevin Spacey plays the fast talking, conniving lobbyist with flair and uber enthusiasm. Abramoff truly believes he's doing good work for his country. His lobbyist firm was hoping that he would use his familiarity with the Republic powers in the White House to generate more revenue with high dollar clients. Instead Abramoff is working questionable clients with borderline legalities while padding the pockets of congressman for their votes. Barry Pepper is Michael Scanlon his right hand man convinces him to try and get more of the American Indian money by pocketing part of the huge retainers. Abramoff uses sleazy mattress store owner Adam Kidan (Jon Lovitz) as the front man while they buy the close to bankrupt SunCruz Casino's run by Greek gangster types. The quick rise to power, greed and consumption should have been a warning sign. Even Abramoff's wife Pam (Kelly Preston) refuses to face the quick and inevitable down fall. Who knows how long this could have gone on if Scanlon's girlfriend Emily (Rachelle Lefevre) didn't use the discovery of bright red panties in her fiancé's dry cleaning to topple the kingdom.

Spacey is always a force on screen, and he inhabits Abramoff with extreme self confidence, name dropping, and the ability to mimic movie star impressions. The opening scene of Abramoff brushing his teeth while firing up his mental engines with an ego driven monologue lets you know right off what you can expect. He's a family man, devoutly religious and totally unrepentant to the mayhem that results from their crimes. Barry Pepper who was barely recognizable in True Grit is all lean edges with hyperactive overdrive as Abramoff's lead cheerleader and instigator of some of the dealings with the Indian tribes. Why anyone would trust these guys is barely glossed over as everyone seems to think they way to happiness is the large amount of cash and benefits these lobbyists offer. Norman Snider's confusing screenplay doesn't give much back story to these slick salesmen. How they manipulate all these people while they stand around in their offices punting golf balls, and patting each other on their shoulders for making more ill gotten gains doesn't make much sense. You really came to see Kevin Spacey who hopefully be getting more roles after garnering a Golden Globes nomination for his portrayal. Director George Hickenlooper whose first feature length documentary, Hearts of Darkness, the making of Apocalypse Now passed away seven weeks before this films' release.
(Review by reesa)