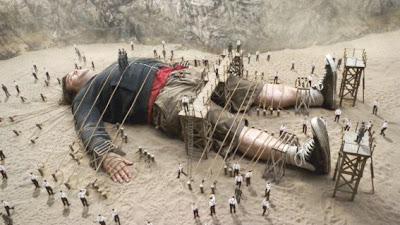 Hopefully there will come to a point when Jack Black will be too old to play these arrested development under achievers. Teamed with Rob Letterman best known for animated feature movies and writers Joe Stillman and Nicholas Stoller who has taken Jonathan Swifts' beloved book and turned it into every Jack Black movie you have ever seen.

Lemuel Gulliver (Jack Black) have been working in the mail room of the New York Tribune for the last 10 years. Keeps his head down, doesn't make waves, is not ambitious enough to go beyond the comfortable job security. His new assistant Dan (T.J. Miller) is promoted to his boss after one day. It prompts him to finally try to ask out the Travel Editor Darcy Silverman instead falters and tells her that he wants to write travel articles. He plagiarizes some writing samples and she send him to cover the Bermuda triangle. A storm comes up at sea and his batter ship lands him on an island where he awakens to discover he is tied up by tiny steam punk dressed Lilliputians who call him the beast. General Edward (Chris O'Dowd) believes he has captured a Blefuscian spy. In the cave prison he meets Horatio (Jason Segel) who is there because he flirted with Princess Mary (Emily Blunt) who is being courted by General Edward. Commoners are not allowed to talk to royalty unless they do something valiant. When the Blefucians attack and try to kidnap the princess, Gulliver breaks free and saves the day. He's declared a hero despite General Edwards protests. Given carte blanche as thanks Gulliver he free Horatio and fills the Lilliputians with pop culture references as his life story. They recreate Times Square for him with his face on every poster. Gulliver encourages Horatio to court the Princess. Angry Edward takes down the country's defenses but Gulliver once more overcomes. Until the enemy with Edward's help creates something that the giant beast cannot over come.

Billy Connolly is basically wasted as King Theodore. O'Dowd is amusing as the egocentric general who can't give one reason why he loves the princess besides her chest. Emily Blunt is probably the best of the lot with her bored and clueless princess. Then we have to believe that Amanda Peet really likes Gulliver the mail room guy even after he basically causes war among the little people. The vision of Black in a doll dress with a giant little girl is not enough to redeem the movie that pretty much lost it after he got sent to that island. There are some amusing bits in film, but when the cast breaks out in rock and roll song at the end you know it's jumped the shark. It will bring in the home for the holiday crowds, but will sink fast to DVD.
(Review by reesa)