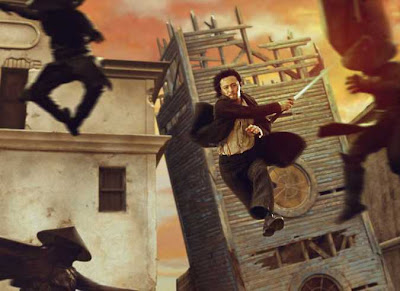 “Ninja's damn...” Great line in the trailer but it doesn't appear in the movie.

The world's most deadly assassin is given the assignment of killing the last member of a enemy clan which turns out to be a cute little baby girl. Upon seeing her face he refuses the mission and flees with the child across the ocean to the American frontier town of Lode to seek refuge with an old friend. Unfortunately his enemies close in putting the town and it's few inhabitants in mortal danger from ninjas.

Korean actor Jan Dong-gun plays Yang the warrior with perfectly coiffed hair and legendary skills that has defeated armies. The narrator immediately tells the viewer that he dead eyes, hence the blank slate of reaction he shows in every situation, danger or happy. Unwilling to kill the child he takes her with him to protect her from the warring clans. When he gets to the former gold rush town he discovers his friend had died. The town is now in shambles inhabited by Ron (Geoffrey Rush) a worn out drunk, a dozen eccentric characters and an odd assortment of circus performers. Yang decides to stay in the town as a laundry man and make a home for the child with the help from Lynne (Kate Bosworth) a knife thrower in training . Yang notices that Lynne has a gift for blades and in turn teaches her martial arts. Lynne is also harboring some secrets of her own that have to do with the Colonel (Danny Huston) who comes back Lode during the town's Christmas celebration. He sends most of his henchmen off to the their next terrorism, while the Colonel stays back with a few men to revisit his favorite “haunts” and find a girl with good teeth. Lynne would do everything in her power to exact revenge. Yang knows that if he uses his “weeping” blade to help Lynne it will immediately reveal his location to the murderous ninjas seeking him.

Written and directed by Sngmoo Lee and produced by Barrie Osborn (Lord of the Rings), Warrior's Way mixes fantasy and action with an East meets West story. Cowboys and Ninjas. The visual effects are stunning with the slo-mo flying ninjas, body parts and clowns. The mayhem involves faceless henchmen armed with guns and swords that leap from the pages of a graphic novel. The backgrounds are saturated with better than real life color like a flower bed impossibly growing from a sandy dusty landscape. The dialogue is terse and not filled with lots of expository. What you see is basically what you get. What you get is a wacky, original, and not to be taken seriously ramen noodle western. Plus it's got the prettiest little baby in the whole world.
(Review by reesa)