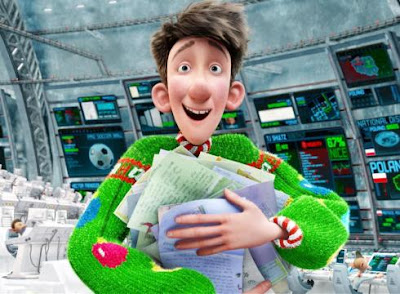 Santa Claus lives in East Denmark with his wife Martha and his two sons Arthur and Steve, along with their grandfather Grandsanta. Santa's workshop has been turned into a high tech operation by Steve who is preparing to take over guiding the Santa spaceship sled S1. Operations are controlled at a gigantic Star Trek type console with elves manning the computers that coordinate the magic that happens every Christmas Eve. On returning from Santa's 70th trip bringing joy to every worthy child in record time, an undelivered present is discovered by the cleanup crew. Steve thinks this is an acceptable error as it falls below their projections. But Arthur who works in the postal department reads all the letters and sees first hand the needs of the kids writing to Santa. He believes that you cannot disappoint one child who was waiting for Santa so he takes matters into his own hands.

Director Sarah Smith wrote the screenplay with Peter Baynham using the animation by Aardman Studios the creators of Wallace & Gromit. It's crisply shot visuals are voiced with British accents and humor that may go over the heads of American children. What most kids will appreciate is the funny set up of Arthur (James McAvoy) attempting the take Grandsanta's (Bill Nighy) old school sled powered by actual reindeer. It's a last minute decision after trying to get his father (Jim Broadbent) and Steve (Hugh Laurie) to understand the importance of bringing the girls' lost gift to her home in Cornwell, England before morning. Steve convinces his dad with math that it's impossible to deliver just one package before the sunrises. That it's ok if just one fell between the cracks. Steve with his goatee and a Versace skintight Santa suit over his fit form is clueless when it comes to kids. Santa wants to retire but unsure of what he would do without being Santa. Mrs. Santa (Imelda Staunton) ever the wise voice of reason tells him that he would stay home with her.

The wild ride of Grandsanta and Arthur's attempts at flying using the 1800's sled with those reindeer sires of the Dancer, Prancer, and “those other two” powered by magic dust from the aurora Borealis is the best parts of the movie. The gift wrapping elf Bryony (Ashely Jensen) and a reindeer in a cone collar accompany them lending assistance. The sun is rising and they have a short time to find their way without the high tech gadgetry and speed that powers the S1. They lose their way, lose some reindeer, get mistaken for a UFO causing a major world crisis.

Today's tech savvy youngsters will appreciate all the bells and whistles of how Santa is able to deliver presents to the millions of children all over the world. In fact they may agree with Steve that missing one house is not a big thing in the grand scheme. However having Steve take over as Santa doesn't quite seem the right fit. Whereas younger brother Arthur is the one who truly believes the joy of the Santa tradition. The dry English style wit may lose something in the translation for some smaller kids, but there are plenty adventure and computer references they may appreciate. A little girl wants to know the mechanics of how Santa is able to deliver everything in one night and why she can't see Santa's house using Google maps. Arthur Christmas will delight the kids, and the parents won't get bored.
(Review by reesa)