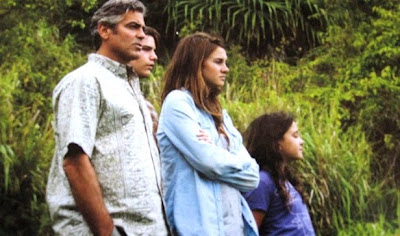 George Clooney has the powerhouse image of an actor, director, Academy Award and Golden Globe winner, humanitarian and all around debonair man about town. He's come a long way from the head bopping doctor on the television show ER. At one time he auditioned for the role of Jack in Alexander Payne's last directorial feature film of Sideways, but it was given to another actor because he thought Clooney was too well known. A problem with big named movie stars is their persona overshadows the role they are performing. In this case, Clooney transcends that movie star image and becomes the character so completely that his performance is generating an award season buzz.

Matt King is a real estate attorney and trustee of his family's 25,000 ancestral acres on Kauai since the mid 1800's. Descended from the daughter of the last Hawaiian king the land is now subject to the end of the rights of perpetuity laws to be dissolved in seven years. The large mainly haole (Caucasian) King family cousins and the people of the state all have a stake in what Matt decides. Most are favoring a local developer who wants to build a resort and homes as opposed to some cousins and the local populace of the island who just want to leave it in it's pristine beauty. Matt has always been busy working on this project so when his wife is left comatose from a boat accident, that for the past 23 days he's been in a daze of hospital procedures and dealing with his 10 year old daughter Scottie (Amara Miller). Matt admits he's been an absentee dad most of the time. Scottie has been acting up at school and sending a classmate inappropriate text messages. He's clueless on how to deal with this and brings his 17 year old daughter home from the boarding school she's been attending on another island. Alexandra (Shailene Woodley) has her mother's wild and impulsive side by drinking and doing drugs. She is harboring some guilt from the last encounter she had with her mom. She breaks it to her dad that mom Elizabeth (Patricia Hastie) was having an affair. This puts Matt into a controlled tail spin as he deals with trying to find his wife's lover, handling the girls rebellious and foul mouthed behavior, his in laws, and the family corporation that greedily envision dollar signs selling the family lands.

Clooney gives the most natural and unaffected performance ever. He takes on the life of Matt King as a fully realized human being with out histrionics or affectations. He's a man who always used work to escape from his family responsibility then suddenly has to confront everything that he's been avoiding all these years. The humor from the script by Payne, Nat Faxon and Jim Rash and taken from the novel by Kaui Hart Hemmings is organic and unassuming. The co-stars like Nick Krause as Alexandra's stoner friend, Robert Forrester as Elizabeth's prickly father, Matthew Lillard as her lover Brian, and Judy Greer as Brian's wife are all believable and sympathetic. Meeting them through Matt's experience we also discover the life he's been missing from his family and friends ultimately accepting them for their foibles and peccadilloes.

The Descendants doesn't have car chases, explosions or any other weaponry. It doesn't have stupid inane characterizations or bromances. It has laughter, sorrow, and the scenic beauty of Hawaii that you don't normally see on Hawaii 5-0 or Dog the Bounty Hunter. Most of all it has Clooney who provides the heart of this film that will stay with you as you leave the theater. Hopefully we won't have to wait another eight years for directors Alexander Payne's next feature.
(Review by reesa)

Email ThisBlogThis!Share to TwitterShare to FacebookShare to Pinterest
Labels: The Descendants reviews