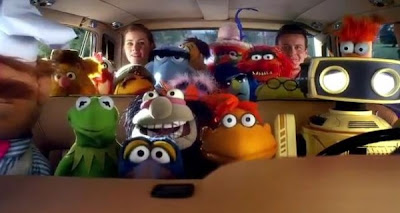 It's been twelve years since the last theatrical Muppets movie has graced the screen. There's been numerous television characters turned into movies that cater to a generation of viewers like the Smurfs, The Beverly Hillbillies, The Dukes of Hazzard, and Alvin and the Chipmunks that are supposed to be family friendly. The Gen-Xer parents reliving their younger days while introducing their youngsters to what they used to watch all with various degrees of success. But most everyone loves the Muppets. Jim Henson's wide mouth buggy eyed fleece puppets are seem regularly on Sesame Street. The Muppets TV show was not only aimed at kids, but had a snarky comedy appeal that parents enjoyed. Big named stars would frequent as guest stars giving the show a bit of the “in crowd” flavor.

Director James Bobin (Flight of the Conchords, Da Ali G Show) worked from a script by Jason Segel and Nicholas Stoller (Get Him to the Greek) are known for their R-rated movies. This story couldn't possibly be anymore sugar coated without amazingly enough being annoying. It retains the same ironic, sarcastic, and innocent kind of humor that's silly and comforting.

The story is about Gary (Jason Segel) who wants to take a vacation with his girlfriend Mary (Amy Adams) to Los Angeles. His brother and best friend Walter (a new character voiced by Peter Linz) considers himself the biggest Muppet fan (uh...because he is one?) and wants to go to LA to visit the old Muppet studio. Despite Mary's hope that this would be a romantic trip with her boyfriend, just smiles and makes room. After all they live in a 50's version of Smalltown, USA where everyone sings, dances and gets along and who all come out to wish them well. They find the Muppet Theater run down and being bought by tycoon Tex Richman (Chris Cooper) who wants to drill for oil on the site. Walter discovers the plan and urges his friends to help him find the other Muppets to help stage a Muppet Telethon to raise $10 million to save the theater.

All the Muppets are gathered with the help of Kermit who lives in the mansion by himself while Miss Piggy is living in Paris. They travel by “map” back to California all stuffed into Kermit's Rolls-Royce where they put together a show. They kidnap Jack Black to emcee the show after talking Veronica a TV producer (Rashida Jones) into broadcasting it. They have only a couple hours to raise the money. Meanwhile Mary goes home after Gary forgets their anniversary.

Can't have the Muppets without musical numbers and there are some very lively and colorful performances including some fake tap dancing by Jason Segal. The big show stopper is by Walter called “Am I a man or Muppet” which should give some idea of the type of songs to expect. A fresh and nostalgic tribute to Henson's magic that is both hip and nerdy at the same time. Also see Being Elmo that gives an amazing look on how a Muppet character is developed and the people who are pulling the strings.
(Review by reesa)

Email ThisBlogThis!Share to TwitterShare to FacebookShare to Pinterest
Labels: The Muppets review