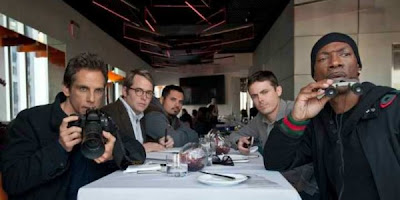 Ben Stiller plays Josh Kovacs the mild mannered manager in a full service high rise residence hotel. Nothing seems to rile him as he juggles the daily crisis in the different departments and the pampered residents with their special requests. Josh thought he was a good friend to the occupant of the penthouse who owns the tower building and had recommended the employees invest in his plans to make them rich. The big news that concerns the everyone is that the Arthur Shaw (Alan Alda) has just been accused of embezzling. Now all their life savings have been lost and their jobs are threatened by the unrepentant swindler. An angry Josh with some coworkers go to Shaw's penthouse and take a golf club to his prized red Ferrari parked in full honored display which gets them all fired by their boss Mr. Simon (Judd Hirsch).

A drunken FBI agent leaks to Josh that Shaw has $20 million stashed away in his penthouse. Josh who more than familiar with the layout of the tower concocts a plan to steal the treasure from Shaw. Since they are not thieves by nature, he recruits a real criminal from his neighborhood. Slide (Eddie Murphy) decides to test his new team by making them shoplift items at the mall. There's meek Charlie (Casey Affleck) the soon to be dad concierge, the dim new bellhop Enrique (Michael Peña), Mr. Fitzhugh (Mathew Broderick) an ex-stockbroker who is getting evicted from his tower condo, Lester the doorman (Stephen McKinely Henderson) whose impending retirement was ruined and lost and Odessa (Gabourey Sidibe) the Jamaican made who just happens to know how to crack a safe. Téa Leoni plays Clair the FBI agent assigned to Shaw's case who is nice to see working again, but basically doesn't have much to do.

Tower Heist is a Stiller and Murphy show with both actors keeping their usual manic antics low key and thus making the humor more character driven and amusing. Who really shines in this is Broderick as the slightly off kilter Mr. Fitzhugh who is camping in this empty condo because his wife and kids left him and Casey Affleck a wet blanket type who gets Josh's job when he's fired. The Ocean Eleven's ensemble-like team is fun and entertaining but not as memorable as Clooney and Pitt's group. The movie makes a good date movie after dinner.
(Review by reesa)