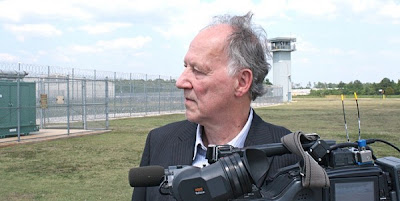 Werner Herzog is an intelligent director and writer of thought provoking documentaries like Encounters at the End of the World and Grizzly Man. He's also directed feature films Fitzcarraldo and The Bad Lieutenant:Port of Call-New Orleans. He founded his own production company in 1962 and has since won numerous international awards for his work. Last year he explored early man's paintings in Cave of Forgotten Dreams. This year his camera's focus is on a triple homicide that happened in Conroe, TX. Utilizing police video, interviews with the perpetrators and their families, and the surviving families of the victims Herzog who admits that he's against the death penalty is able to convey all sides of the issue without being totally judgmental.

In a small town in Texas on a Thursday night on Oct 24, 2001 Sandra Stotler age 50 and her step grandson James age 16 who she adopted at 6 months old and his friend Jeremy Richardson age 18 were murdered. Sandra's body was found at Crater Lake, the boys were found later in the woods at a subdivision. Michael Perry and Jason Burkett both 19 were later arrested after a shoot out while trying to flee. Ten years later Burkett is serving life and Perry who had a separate trial was given the death penalty. Eight days before the date his execution by lethal injection Herzog interviews him telling Perry that “I don't have to like you”. Perry still looking like a young boy smiles with a toothy grin and a remorseless attitude.

The police shared with Herzog the police video's of the bloody crime scene with the police dry assessment of the forensic facts. While showing the lake dumping grounds, the camera stays on the face of the uncomfortable deputy who after describing the discovery of the remains had nothing more to say. The accompanying sound scape is filled with dissonant violins giving it a creepy horror movie vibe. He visits the execution chamber and talks to an ex-captain who goes through the steps of the prisoners last moments. The toll it takes on the psyche of the guard is the reason the captain became an “ex”. There's also a visit with the prison chaplain who uses squirrels as a metaphor.

Emotionally filled interviews with the daughter/sister/aunt of the Stolter family remind the audience that violent crime stays long after the event. Also tortured is Jeremy's brother who went AWOL from probation in another state to come to the funeral. Herzog also spoke with Burkett's incarcerated father who is serving multiple years in prison for various crimes who readily admits that his son's misdeeds are a direct result of his poor upbringing. In fact Herzog paints a pretty grim picture of Conroe, Texas and it's citizens living on the margins of existence.

Herzog as usual does not appear in the movie only signature German accents narrates the tale. The camera's focus does not shy away from the very personal drama of everyone involved in the case. Even the pen-pal Stepford like bride of Burkett who blindly believes he's innocent and who at the end of the film is expecting a child although she and the prisoner are not allowed physical contact outside a hug. In fact, both Perry and Burkett insisted on their innocence without one moment of remorse. Although the film doesn't lean one way or the other on the issue of the death penalty outside of Herzog's own personal opinion stated early in the film, it does raise the question for discussion.
(Review by reesa)

Email ThisBlogThis!Share to TwitterShare to FacebookShare to Pinterest
Labels: Into the Abyss review