My Week With Marilyn 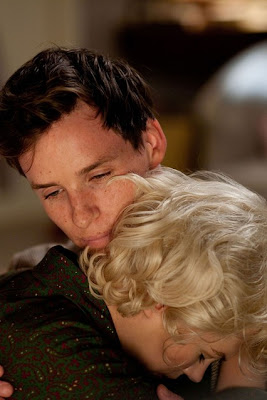 In 1956 Marilyn Monroe the biggest star of the known world came to England to work on the movie The Prince and the Showgirl starring and directed by Sir Laurence Olivier. Twenty three year old Colin Clark leaves his family's well to do home to follow his dream of working in the movies. He camps out at Olivier's production company until a job opens up. Olivier's wife Vivian Leigh and a friend of the Clark family begs her husband to give the young man a job. Years later Colin Clark wrote a book on his experience working on the film as a 3rd Assistant Director (otherwise known as a glorified 'gofer'). The book did well so after the death of Marilyn's husband at the time Arthur Miller, he wrote another book about a week he spent alone with Marilyn. Director Simon Curtis combined the stories from the memoirs with screenwriter Adrian Hodges to capture a moment in time from Colin's viewpoint on the turbulent and charmed life of Marilyn Monroe.

Michelle Williams captures the beauty and essence of the icon known as Marilyn Monroe. The girly voiced blond bombshell that epitomized the Hollywood dream who comes to stodgy old England upsetting the classically trained actors with her ever present method acting coach Paula Strasberg (Zoë Wanamaker). Kenneth Branagh's Olivier has little patience with Marilyn's nervous jitters and chronic tardiness. Unruffled Dame Sybil Thorndike (Judi Dench) who had been standing for 2 hours in full period costume and makeup while while Marilyn gets into character tries to put the actress at ease. Marilyn is so in awe of the acting company around her can barely do her lines.

Colin (Eddie Readmayne) has been put in charge of finding a house for Marilyn and her new husband writer Arthur Miller (Dougray Scott) . He is mesmerized by the charismatic starlet as is everyone else who is in her orbit. Vivien Leigh (Julia Ormand) who was once considered the most beautiful woman in the world now worries she has lost her luster now that she is in her 40's while her husband entertains fantasies about Marilyn. Colin later earns Marilyn's confidence over her business partner Milton H. Greene (Dominic Cooper) who warns him about falling in love with her. After Marilyn fights with her husband who returns to New York, her vulnerable state sends her into a full panic mode. Everyone notices her reliance on Colin and try to keep them apart but she and her bodyguard “kidnap” him from the set. Colin's spends some alone time Marilyn who is at ease and more herself while they share some personal moments and skinny dipping in a cold English pond.

A number of actresses were rumored to be attached, but Curtis had approached Michelle Williams as he was impressed by her dedication to creating Marilyn. With the wonders of makeup and costume enhancement Williams “becomes” the vision of MM. She closely studied the recordings of Monroe especially the little dance number in the Prince and the Showgirl that helped her capture the magic that was Marilyn. Readmayne is earnest as the infatuated Colin. Look for Emma Watson in a underused role as Colin's potential girlfriend who doesn't give him a 2nd chance. Branagh is perfect as Olivier even though the Shakespeare quotes are a little over the top.

Everything on screen is beautifully photographed and decorated. The costumes, the vintage cars, the sets take one back to the 50's. It's too bad the story is almost like a Lifetime channel recap for Cliff Notes. The sincerity of the performances, especially Michelle's knock out portrayal of the unstable movie star will mostly likely bring her an award nod. A full biopic of Marilyn would probably be tedious. This little peek at such a pivotal moment in her career is a fascinating tidbit. The Prince and the Showgirl did not do well in the theaters. Their subsequent projects turned out to be the biggest in their careers. It may not attract the crowds looking for cheap thrills, but for those of us that love cinema and history it's a must see.
(Review by reesa)

Email ThisBlogThis!Share to TwitterShare to FacebookShare to Pinterest
Labels: My Week With Marilyn review