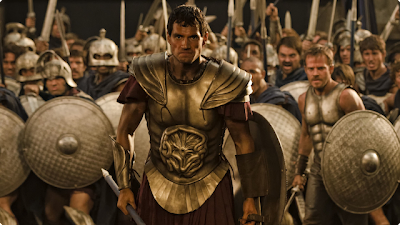 The Producers Gianni Nunnari and Mark Canton have done it again!!!!!!!!!!!

“Immortals” is a film packed with blood, abs, excitement, sex, action and Greek Mythology “Oh” and did I mention ABS!!!!!! There is never a dull moment. The beginning discusses the history of the gods and the Titans. Due to animosity war broke out thousands of years between the two before mankind . Losing the battle, the Titans were vanished for eternity.

The main characters of the film includes: Theseus (Henry-Cavill), Zeus (John Hurt & Luke Evans), Phaedra (Freida Pinto), and their nemesis King Hyperion (Mickey Rourke). Theseus is a sexy, young character with humble beginnings that turns out to be his people’s hero. In the beginning he was skeptical about the gods. His turning point starts with a devastating lost and a significant discovery. Along the way Theseus befriends a wise old man, a sought after oracle and other gods.

What is an action film without a nemesis???? Unfortunately, Thesis is forced to face hell on Earth while dealing with the devil in disguise. When I say hell on Earth I mean literally. In the Nemesis camp people are getting tortured and are forced to die slow deaths daily. The Nemesis has no respect of person or “GENDER”. In fact, the only thing he’s worried about is releasing the demonic Titans. In order for the Nemesis desires to come to pass he must first obtain a powerful instrument in which Thesis discovers first.

The sound effects mixed with action will keep you on the edge of your seat. Every sound went perfectly with each scene. The 3D effect will heighten your emotions and the music/ clothing attire will make you feel is if you have traveled back to ancient Greece.

The movie is rated R and is intended for mature adults. Rather or not you are into Greek Mythology it’s still a “MUST SEE” simply because of the intense exciting action.
“Two thumbs and a foot up”!!!!!!
(Review by Kishae)

Posted by Dallas Movie Screenings at 1:35 AM