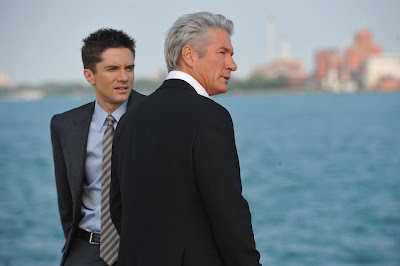 Mexican mules bring across their border crossers which includes a few Russians who kill their guides as soon as a border control car shows up which turns out to be their ride. Meanwhile a Senator who has been suspected of making deals with the Russians is under surveillance by the FBI. When he is murdered under their watch, the CIA arrives to take over. First feature direction by Michael Brandt who also wrote the screenplay with Derek Haas had worked together on Wanted and 3:10 to Yuma. The story has an interesting concept, but the final film is a disappointing fail.

Paul Shepherdson (Richard Gere) is a retired from the CIA who comes home one night and finds newbie CIA agent Ben Geary (Topher Grace) in his house. Ben tells him that the legendary Cassius a Soviet assassin may be back. Paul has spent his career chasing his nemesis who thinks Cassius is long dead and the cases may be the work of a copy cat. Ben who wrote his Masters on Shepherdson's work is convinced that he's alive and well and continuing his crimes. Paul's former section chief Tom Highland (Martin Sheen) who is now the boss pushes him to work with Ben. They visit an associate who was trained by Cassius who is now in prison. Paul gives Brutus (Stephen Moyer) some batteries for a radio that he promises in exchange for information. Brutus eats the batteries to escape. It seems Paul had planned it and ends up killing Brutus. Is this a red herring or is Paul really Cassius as the trailer for the movie suggests?

No surprises when the trailer pretty much tells you that Gere's character is the bad guy, so you have to expect there's something else going on. The movie starts out as a procedural as Ben and Paul go through the numbers investigating the murder. Then somewhere along way it loses it's focus and becomes a muddled mess. Things happen for reason's no sense of reason, characters do inexplicable actions, not enough information is given for the audience to connect the dots. Gere as always puts on his serious face. He looks good, but one can't help thinking that maybe the script he read was not the same as the finished product. It's nice to see Topher Grace as a grownup and not playing the awkward new guy. True Blood's Stephen Moyer and Stana Katic of Castle are in there too with parts that are there then not. The trick ending is supposed to surprise, but it was actually a “really?” What was Richard Gere thinking?
(Review by reesa)

Email ThisBlogThis!Share to TwitterShare to FacebookShare to Pinterest
Labels: The Double review