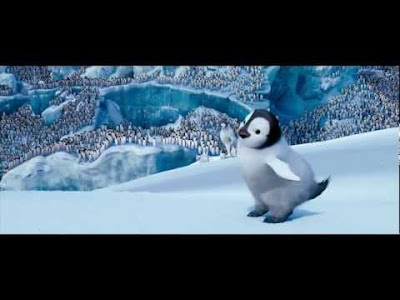 In the first Happy Feet, Mumbles was just a kid who turned his community of Emperor Penguins on to the magic of dancing when he had trouble with his “heartsong”. The dancing eventually saved the penguins from over fishing by humans. In this sequel Mumbles and Gloria's son Eric is dance-phobic. He becomes embarrassed when others laugh at his clumsiness. He and his friends decide to follow Ramon the Hispanic accented penguin who wants to get back to his home country. Meanwhile the melting polar icecap is causing massive earthquakes and land shifts. A subliminal message to kids about global warming.

Elijah Woods is once again the voice of Mumble and his mate Gloria has the powerful singing voice of Pink. Mumble is an awkward dad who just makes the situation worse. Little Erik (E.G. Daily) decides to follow Ramón (Robin Williams) who takes the three little fuzzy runaways to a major penguin gathering. The group seems to be enamored by with The Mighty Sven (Hank Azaria) a little penguin that can fly. He's like a new age guru encouraging the penguins with a dream of flying. Lovelace (Robin Williams again) supports the new Svengali as they had shared some moments with the “aliens” or humans when they were rescued. Mumbles had followed the little birds. He instinctively distrusts all the attention given to Sven and the hero worship by Erik. Mumbles takes the boys home where on the way they encounter a series of adventures that involve a elephant seal dad and his pups and the trapping of the emperor colony by walls of ice.

In between these episodic moments are Brad Pitt as Will the Krill and Matt Damon as Bill the Krill. Will decides he's going to leave the swarm to become something special including being a carnivore. The clever banter of Bill and Will is fun and more interesting than the rest of the story. But it doesn't make for a whole movie. More like the cartoon that plays before the main feature. As it plays now is more like filler. Just like the story line involving Ramón who wants to romance Carmen (Sofía Vergara) who isn't giving into his overtures. Sven and Lovelace's shipboard story is told in a flashback of how Lovelace got his sweater and danced to their on board rock band. Each of these parts of the story seem disjointed and doesn't have anything to do with the main characters of Erik, his dad Mumble and how they regain their trust and respect. All the little pieces somehow come together for them to save the day.

Director George Miller is back and shares writing credits with Warren Coleman, Gary Eck and Paul Livingston. As usual the animated images are clear and detailed. It's questionable if it really needs enhancement with 3D, there's only a couple of moments where it's effectively realized. The rest is just another way to soak the customer for a few dollars each for the privilege. The music is fun at times. Pink has a bluesy soulful voice, but the rest of the tunes are forgettable. Parents will be dragged by their kids to see this version of cute little penguins and all the material tie-ins that will accompany this series.
(Review by reesa)