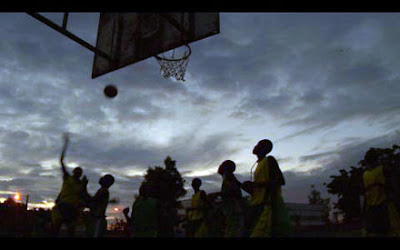 Hoop dreams take on a totally different meaning when the dreamers are from a one of a kind boarding school in Dakar, Senegal. Founded by Amadou Gallo Fall who was recruited from Senegal, sent to college in the states, and played professional basketball for 4 years before becoming a scout for the Dallas Mavericks. Wanting to give back be began the SEEDS Academy where tall, athletic young men work hard at academics and specialize in basketball with the goal of earning a scholarship to a US prep school which will hopefully lead them to the NBA.

First time filmmaker Anne Buford is the sister of San Antonio Spurs general manager RC Buford who is involved in SEEDS (Sports for Education and Economic Development in Senegal). The story follows the lives of four young men as they speak of their hopes and aspirations. Amadou who graduated from college magna cum laude stresses to the teenaged students that they have to prepare for life beyond the game and that not all will make it to the NBA. At the ages of 16-17 the young men range from just over 6 ft to 7ft tall. Soccer is what most kids play from the time they can walk. So some of these kids are just learning basketball. They don't have the skills or basics of the game embedded in their muscle memory as American kids. In class they speak French, but students also speak their native language. They must also speak English to prepare for their lives in the states. It is stressed they are given great opportunity and are united in their goal to prove to the world that people from Senegal and to the larger extent from Africa are not the stereotypes usually portrayed. They know the world will be watching them and the success of the SEEDS program will help others from their country seek their goals.

American coaches come to the school and soon offers are being made as one by one the students are being sent to the states to attend prep schools on a full scholarship. The struggles they experience of being taken away from their home to a whole different environment with tall buildings, snow, wearing suits and ties to class, and the isolation of not totally understanding the language. Throughout the film they deal with injuries, locker room infighting, and a frustrated coach leaving for a job with Nike in the middle of the season. Academically they were always the smartest in their hometown schools and the American academics challenge their confidence. They are more than aware that reaching the NBA is a long shot. One of the men has dreams of being a doctor. The film follows them through graduation as they go off to college. Not all got the big name schools, but the full rides offered give them a chance to continue their education and the NBA hope is still 2 years away when the movie was completed. They may not make it to the big time game, but these hoop dreams they can take back home to their loving supportive families.
(Review by reesa)