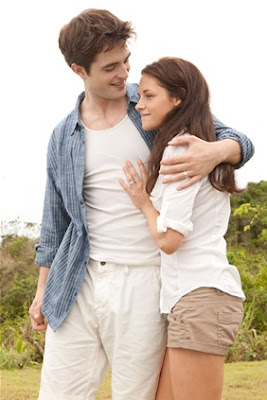 I must be honest with my audience and admit that, in a small way, I enjoy the Twilight movies. I am not a Twihard and I certainly understand that the series has a number of problems (so I will never vehemently disagree with its critics because most of them are right on the money with their complaints). Still, despite it's issues, I have grown to like and care for these characters.

In a way, this film is the best and the worst film of the series. It's the best film because the things that everyone have been waiting for finally happen (like the wedding, Edward and Bella making sexy time, and Bella's true connection with Jacob) and it's the worst because, well, it is filled with so many more problems than any of the others that anybody who is uninitiated or has grudgingly sat through the rest of these is probably going to want for Edward to bite them in the neck before its over. The plot here is very thin. Basically, you could sum this whole movie up in a sentence or two. Edward and Bella get married, make sweet room smashing love, Bella gets pregnant, everyone gets pissed, Bella has the baby, and then we end with a surprise that's really not much of one, but I'm not going to ruin it for you anyways. If this sounds like what you were expecting and you are not turned off then most likely you are going to like this movie. Everyone else, you may have a hard time ignoring some of the unbelievably cheesy sh*t that happens in this film.

So, it’s sounds like I don’t like it doesn’t it. It kinda feels like I don’t like it as well, but honestly I had a pretty good time. There are definitely enough issues to fill a small country with, but there is also something about this pop culture phenomenon that is moderately engaging. It might just be the fact that I have grown to care for these characters over the last couple of years or that Kristen Stewart is good enough here to carry this film or maybe because the last 30 minutes was pretty darn good under Bill Condon’s assured direction. Whatever it is, I cannot completely dismiss this movie and I am moderately interested in how this is going to end (emphasis on the word moderately).

Review by Nathan Ligon
Thank You For Watching