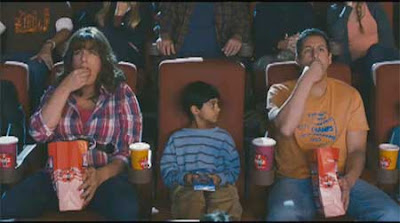 If you see this movie that snap crackling pop you hear is the sound of your brain cells dissolving while watching Adam Sandler's newest production about a dysfunctional twin brother and sister comes to the big screen. However if you enjoy bathroom jokes, insulting women, racial slurs, stupid sight gags and jokes aimed at the lowest common denominator then this will be fun.

Adam Sandler plays the duel role of Jack and Jill with camera magic that sometimes works and other times looks awkward. Jack Sadelstein is a successful advertising executive who lives a comfortable life with his wife Erin (Katie Holmes) and their two kids. Every year at Thanksgiving his twin sister Jill comes from the Bronx for a visit. Jill is particularly lonely as this is the first holiday since their mother passed. Jill's passive aggressive personality and her blatant neediness drives her brother crazy. So he's more than vexed that Jill wants to stay longer. Jack had been planning to take the family on a cruise to Europe and being stuck on a ship with his sister for 7 days fills him with dread. Jack decides to get Jill hooked up up with computer dating which is a major fail especially after Jack puts her on Craigslist. Jill goes on a game show and gets knocked out by the wheel on the Price is Right. Almost feeling bad for his sister he takes her to a basketball game where she entrances Al Pacino who Jack is trying to contract for a new Duncan Donut commercial called Dunkachino. He realizes that he may be able to use Al's infatuation with Jill to get the account.

Stunt casting, fart jokes, and Sandler in bad drag, does not a movie make. It's scary to consider that there are investors who were willing to finance such drivel. Granted there were advanced screening audience members laughing hysterically at such obvious bits as long noisy farts and Jack pretending to Jill and lots of mean humor directed at the way Jack treats his sister and her appearance. Of course the moral of the story is the most important thing in life is family.

It was more interesting seeing the cameo's of Sandler's famous friends like Dana Carvey, Shaquille O'Neal, Johnny Depp, David Spade (as a Snookie kinda girl), Rob Schneider, and Norm MacDonald. Director of Grownups and Just Go With It Dennis Dugan with a script by Bruce Almighty's Steve Koren is uneven and at times too manic. The only very amusing parts were the real life twins interviews at the beginning and end through the credits that spoke of the special connections between siblings. Jack and Jill will be odds on favorite for probably the worst teeth grinding nails on chalk board contender for the Golden Raspberry Awards.
(Review by reesa)

Email ThisBlogThis!Share to TwitterShare to FacebookShare to Pinterest
Labels: Jack and Jill review