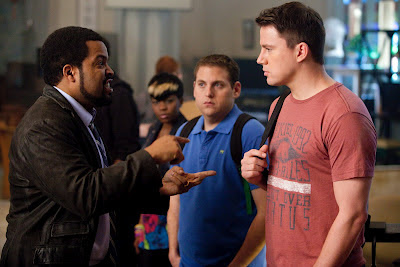 High school for Morton Schmidt was a complete loser-ville for the book smart nerd teen. While Greg Jenko was the popular jock prom king, but not all that bright. Some five years later they find themselves in the police academy helping each other out and becoming best friends. After an unsuccessful first assignment on bike patrol they are sent to 21 Jump Street headquartered in a Korean church where they are sent undercover as high school students investigating a new synthetic drug called HFS.

The reboot of the popular TV series of the same name that ran in the late 80's catapulting Johnny Depp to fame has been in development for years. Directors Phil Lord and Chris Miller (Cloudy with a Chance of Meatballs) with writer Michael Bacall (Project X and Scott Pilgrim vs. the World) mixes a bit of grisly police work and slap stick comedy. Parroting Pineapple Express in it's broad comedic expressions that are held together with a careful dose of heart and friendship in this buddy movie.

The newly svelte Jonah Hill plays Schmidt and Channing Tatum for once not playing a love object as Jenko go back to high school with their unresolved issues. Of course high school has radically changed since 2005 with different cliques and attitudes where nerds are now cool and jocks are not. Arrested developed Schmidt and Jenko awkwardly fit right in despite looking much older than a teen. The fish out of water concept works really well as the two over aged kids try to not only right their high school blunders but also catch who is behind the drug trafficking. Drug dealer Eric (Dave Franco, James Franco's younger brother) makes the two take the new hallucinate drug in front of him so he can make sure they are not narcs. The result is a hilarious bit as the drug has stages of effects that are written on the screen in comic book style.

Like other self aware comedies of late this movie doesn't take itself seriously even poking fun at itself throughout like when their Captain (Nick Offerman, Parks and Recreation) tells them their new assignment is a rehashed idea from the 80's. The chemistry between Tatum and Hill as polar opposites works really well. Ice Cube as Capt Dickson leader of 21 Jump Street, Ellie Kemper as Ms. Griggs the over heated teacher after Jenko, and Rob Riggle as Mr. Walters the off skew coach are all very funny popping in and out with their bits. There's car chases, parties, and a high school production of Peter Pan. At times you may feel guilty for laughing at something so inane, but the laughs go from beginning to end, and it's about time.
(Review by reesa)