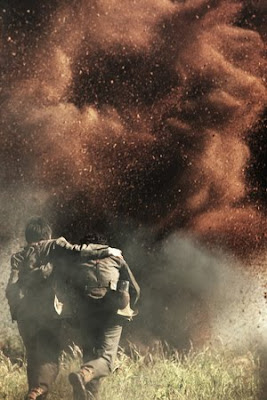 Exclusive Southwest Premiere of MY WAY to be Centerpiece Gala at the Dallas International Film Festival with celebrated
South Korean Director, Kang Je-Gyu

Dallas, TX, March 8, 2012 — The Dallas International Film Festival presented by Boardwalk Auto Group Volkswagen Dealers announced today that the South Korean epic, MY WAY (2011) will be featured in one of the coveted Centerpiece screening slots with director, Kang Je-Gyu in attendance. The Closing Night festivities will be marked by a special cast and crew reunion to celebrate the 25th anniversary of the Sci-Fi classic ROBOCOP, which was shot in Dallas. DIFF also announced that the 2012 Festival will be dedicated to Cinemark’s Lee Roy and Tandy Mitchell. Additionally, groundbreaking digital initiatives will launch the Festival to a new audience through live streaming and exclusive online content.

For the 2012 DIFF, artistic director, James Faust is featuring South Korean films and filmmaking as its international spotlight. As one of the biggest productions in South Korean history, the WWII epic, MY WAY (courtesy of Well Go USA Entertainment and CJ Entertainment) will be featured as the Festival’s Tuesday night Centerpiece on April 17. Famed South Korean director, Kang Je-gyu (TAE GUK GI: THE BROTHERHOOD OF WAR (2004); SWIRI (1999)) from Seoul, South Korea will present the film in Dallas for the first time to a Southwest audience. “There is a very strong Korean community in Dallas and a real interest in its film industry,” said James Faust. “MY WAY and Kang Je-gyu will thrill our audience. Inspired by a true story, the imagery and cinematography in this film is breathtaking but it’s also a classic story about friendship, dedication and sacrifice. As MY WAY features the international star power of Dong-gun Jang, Jo Odagiri and Fan BingBing, we have a truly compelling Tuesday night Centerpiece that showcases the breadth of South Korean filmmaking. This is exactly what I hoped for when creating this International Spotlight category.”

Wrapping the 2012 Festival on Saturday, April 21 will be the 25th anniversary celebration of ROBOCOP. Presented in partnership with the Dallas Film Commission, the historic Texas Theatre will host many of the cast and crew that worked on the film for the film’s first official reunion since it was shot in Dallas 25 years ago.

Lynn McBee, Chairman of the Dallas Film Society Board of Directors announced that the 2012 Dallas International Film Festival presented by Boardwalk Auto Group Volkswagen Dealers will be dedicated to Texas natives and Cinemark visionaries, Lee Roy and Tandy Mitchell, who founded Cinemark USA, Inc in 1987. Cinemark is now the highest attended theatre circuit in the world and operates the second largest number of screens for worldwide theatre exhibitors with 456 theatres and 5,152 screens in 39 States and 13 Latin American countries. “I am so proud to be dedicating the 2012 Festival to Lee Roy and Tandy Mitchell. They are extremely deserving of this accolade,” said Lynn McBee. “What they have achieved in the last 25 years at Cinemark is an inspiration. Over 247 million guests across the world attended the Cinemark theatre circuit in 2011. They help put film on a pedestal by offering breakthrough technologies, comfort, and maximum entertainment value at each of their Cinemark theatres. It is important to us at the Dallas Film Society that we recognize the exceptional achievements of trailblazers within the film industry and there is no better example than Lee Roy and Tandy. Lee Roy, Cinemark’s Chairman, famously says ““Eventually you have to go out on a limb, because that’s where the fruit is.” We want to honor that passion and vision at our festival.”

For the first time, DIFF is launching digital initiatives that promise to offer the Festival experience to a worldwide audience. Partnering with San Antonio-based NewTek and cloud-based video platform Livestream, DIFF will use NewTek’s TriCaster system to deliver the fest experience live online, in hi-definition, as well as create video content for instant playback. Live and recorded events will be streamed at http://www.DallasFilm.org throughout the Festival’s run from the star-studded opening night red carpet, to one-on-one interviews with filmmakers, to capturing Q&A’s with cast and crew and special guests, to the final awards ceremony, the Dallas Film Society Honors. “Each year the Festival is attended by more than 30,000 people, all here to see some of the year’s highly-anticipated independent films,” said Lee Papert, president and CEO of the Dallas Film Society. “Online video coverage of our events can offer this extraordinary content to a larger audience and introduce film lovers to films and filmmakers that they might not otherwise have the opportunity to see. This takes DIFF to a whole new level for us and by expanding our virtual audience it means we can touch many more film lovers across the world. That is exhilarating for us.”

In preparation for the Festival, DIFF is launching a new, state-of-the-art website developed by Pencilneck Software, a Dallas and Canadian company dedicated to the development of new web technology. The festival’s site www.DallasFilm.org will feature a responsive design that allows the site to instantly adapt to any platform — desktop, tablet or mobile device and it will bring the excitement of the Festival to its homepage in April with news, live video, Festival information and social interaction.

A final addition to the DIFF digital line-up comes through partnering with highly respected ticketing solution provider Prekindle to handle its most crucial customer-service areas: the Box Office and the Online Festival Guide. Prekindle’s expertise will be seen at the 2012 DIFF Box Office at the Festival Village in Mockingbird Station and in their complex, custom Internet software that gives the Festival the ability to publish its first ever online Festival Guide. The guide gives attendees unique scheduling and purchasing options, allows DIFF to fully describe its films and events, and gives films and filmmakers more online exposure and promotional capabilities.

Passes are currently for sale and range from $100 for a Festival Lounge Pass to $750 for an all-access Star Pass. Tickets go on sale at the Prekindle Box Office and online to the public on March 22. The Prekindle Box Office will be featured as part of the Festival Village at Mockingbird Station. For further information on pass levels and how to purchase passes visit: www.dallasfilm.org or telephone 214.720.0555.

Posted by Dallas Movie Screenings at 11:24 AM