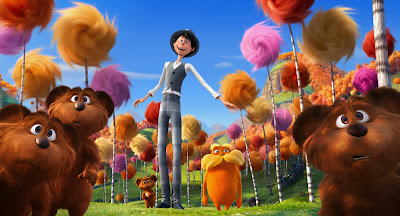 On what would have been the 108th birthday of famed children's author Dr. Seuss, the fourth feature film of one of his book opens on March 2, 2012. The fully computer-animated feature 3-D film tells the story of The Lorax a mysterious orange furry creature who is the guardian of the trees. Danny DeVito is the voice of the Lorax, Zac Efron is Ted is the 12 year old protagonist, Taylor Swift as Audrey his preteen love interest and Ed Helms as the Once-ler.

In the walled city of Thneed-Ville nothing is natural, everything is manufactured. The smog is so bad the richest man in town Mr. O'Hare sells bottles of air. Ted who will do anything to impress Audrey wants to present her with a perfect birthday present. She off handedly says that she would marry the person who can give her a tree. A real tree since the trees in Thneed-Ville are blown up plastic varieties. Ted's Grammy Norma (Betty White) tells him the story of someone called the Once-ler and how he would tell him the story of trees for a nail, a snail and a penny. Only Ted has to go outside the walls of Thneed-ville.

Outside Ted finds an empty land and the ruins of the Once-ler's house who makes him listen to his story before he will tell him of the trees. The Once-ler was once and entrepreneur who came upon the forest of Truffula trees and the home of various little creatures who lived in a peaceful habitat. The Once-ler discovered he can use the trees for an invention that becomes the next big thing. Soon to make more and and become rich he's chopping down more trees. The Lorax appears urging him to cease cutting. At first the Oncer-ler promises he will but greed causes him to wipe the forest clean of trees. Once that happens then he loses everything because his invention can no longer be produced. In order to assuage his guilt he gives Ted a seed to the last Truffula tree.

Directed by Chris Renauld (Despicable Me) and Kyle Balda (Layout supervior of Despicable Me) and written by Cinco Paul and Ken Daurio who added a new beginning and ending centers the story on the environmental impact of what happens when we don't respect our resources. Brightly colored scenes with Seuss's trademark rubbery characters and landscapes and the imaginative trisyllable meter rhymes is familiar to both adults and children. Written by Seuss in 1971 the children's picture book is still relevant today as it had in the past.
(Review by reesa)

Posted by Dallas Movie Screenings at 12:54 AM