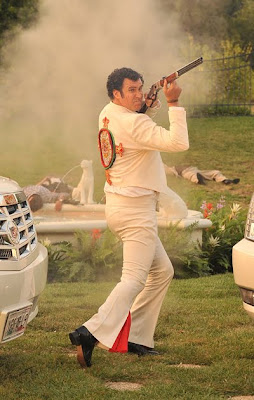 Will Ferrell's newest project doing a Spanish language feature comes from watching telenovelas. The fact that he only had some high school and college Spanish classes in which he didn't do that well didn't deter him. Director Matt Piedmont and writer Andrew Steele have worked with Ferrell on SNL and Funny or Die. The jokes, the set decorations, the special effects are low budget 70's grindhouse type production that is mocking the Mexican soap operas.

Will Ferrell takes on the role of Armando Alvarez who has lived on this father's (Pedro Armendáriz Jr.) cattle ranch his entire life. He doesn't get much respect from his father who says he reminds him too much of his dead wife with his little chicken eyes. In fact he tells his son that he not only looks like his mother but is not very bright like her too. When the ranch gets into financial difficulties his younger brother Raul (Diego Luna) shows up with a new fiancée, Sonia (Génesis Rodríguez). He pledges that he will settle all the debts, but his business dealings turn out to be illegitimate. He gets into a feud with the local drug lord Gael García Bernal as Onza who wears ornate cowboy boots with a white cat patch on them that he's constantly pulling up the pant leg to reveal. The local police joins with some American DEA agents who want to use the brothers to get to Onza. They tell him that Raul is also in the drug trade. Meanwhile Armando is falling for Sonia and Sonia for Armando, but she is also harboring a secret.

Props must be given to Farrell for doing all his dialogue in Spanish even if he had to learn them phonetically. His awkward lines are like Spanish 101 in high school and is trumped by DEA Agent Parker (Nick Offerman) in even more awkward Texican.

The best parts of the movie are the fake back drops, the fake cow and horses, the toy cars and cardboard city sets, and the mannequin body doubles in the sex scene and also used as crowd fillers. Yet the deliberate low quality set ups grow tiresome. The Jim Henson puppet of the mystical white jaguar is probably the worst ever, even if it's supposed to be that way. It's wonderful to look at the costumes and period furniture. But it's sad that it's the only thing interesting.

The cast play their roles in earnest, probably because of their experience playing these types of over blown melodramas for telenovelas. There's a few running gags peppered throughout like laughing and saying goodbye that have no end, and smoking cigarettes constantly. There's the uncomfortable butt shots during the love scenes which probably are inappropriate for the number of kids that were present at the screening.

If you are a hard core Will Farrell fan then it will probably make you laugh. But the screening audience laugh meter didn't sustain itself through the film. This probably would have worked better as an online Funny or Die or SNL skit. Stay through the credits for a bit at the end. Worth staying for? Well if you paid for the movie you may as well.
(Review by reesa)