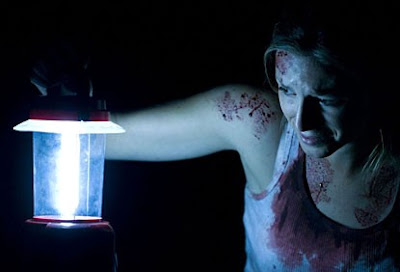 Based on the 2010 Uruguayan Spanish language horror film La Cas Muda directed by Gustavo Hernández it was remade by directors Chris Kentis and Laura Lau and played at the 2011 Sundance Film Festival. The story was supposedly inspired by real events in 1940 but which has never been authenticated. Like the original film it was shot in one single continuous unedited take. Not quite the hand held video camera experience that seems to be very popular these days but still another found footage flick.

Sarah (Elizabeth Olsen), her father John (Adam Trese) and her uncle Peter (Eric Sheffer Stevens) are rehabbing the lakeside home where she used to spend her summers. The place has fallen in despair, the windows broken and boarded up. While the brothers who are working elsewhere in the house, Sarah receives a visitor who says she's a childhood friend. Sarah doesn't seem to remember and Sophia says she will come back later with pictures. The dad breaks a hole in the wall it revealing mold, the insidious smelly kind. John tries to protect Sarah from it by sending her upstairs to pack. There's no electricity and Sarah has to light candles, battery and oil lamps to pack her childhood belongings. The brothers argue about the work and Peter leaves. Sarah who seems to be the fragile sort hears ominous banging sounds. She creeps around the house with a battery lamp calling out for her dad who has suddenly disappeared. Following Sarah around with lamp we soon realize that she is not alone.

Olsen does well with the hyperventilating breathing as she goes from merely nervous and anxious to full blown panic mode. Hiding from an unseen assailant her mouth wide in a silent scream while trying to keep herself quiet while someone moves around her. Because it's dark it's hard to see what causes her to run in fright. It's frustrating at times to see her do stupid things, or not be able to break open a window to let in light, or escape. For some reason the doors lock from the inside and Sarah doesn't have a key. Yet at other times, she seems clever enough to figure stuff out and make some smart moves. There's some red herrings thrown in and some suspicious behavior that's all supposed to let you know that there's something going on that's more to what you see if you haven't figured it out by then. It starts out cool with some good jumps and freaky moments, then somewhere along the way it becomes a psycho drama, and you will wonder where that line was crossed. It's about time to have a good scary movie and at time this film delivers. But can't wait to see Elizabeth Olsen in something more deserving.
(Review by reesa)