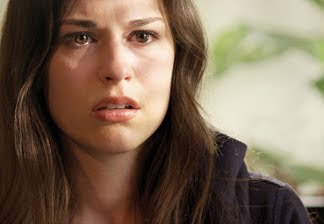 Hannah is a beautiful 19 year old college student who suffers from epilepsy, asthma, and some deep seated psychological problems that stem from her traumatic birth. She doesn't find out the whole birth thing until the start of the movie which sets the stage for the remaining story of her journey of self discovery and the search for her bio-mother. Written and directed by Andrew and Jon Erwin this is a faith based independent feature that strives not to hit the viewer too hard over the head with the “message”. The film makers based the story on a real life cases where babies born after abortion attempts end up with serious physical maladies. The tag line for the film is “Every life is beautiful”.

Rachel Hendrix is fine as the troubled Hannah who never quite felt “wanted” although she was was brought up by her doctor dad Jacob (John Schneider) and mom Grace (Jennifer Price). They discover Rachel's journal talking about her depressive emotional angst. This coupled with the resurgence of her epileptic symptoms forces her adoptive parents and her doctor to explain the circumstances of her birth. Hannah decides her life is a lie and relays all to her best friend Jason (Jason Burkey). He invites her to the Spring Break trip for Mardi Gras in an old beat up VW van (driven by American Idol's Chris Sligh). Jason hopes to give Hannah a chance to look for her mom when they pass Mobile, AL. Of course things go awry when Jason's girlfriend gets jealous. Jason and Hannah end up together looking for her story. Hannah finds Nurse Mary (Jasmine Guy) who handled the procedure that was performed at 24 weeks. She describes in detail what she witnessed that will curl your stomach no matter what side you stand on the right to life debate. Mary gives her the address of her biological mom who was 18 at the time.

While the subject matter of this film will be off putting to the mainstream the main theme of the story is mostly about forgiveness and letting go of the hate, anger, fear and pain. Hannah wanders into a Catholic church and gets some words of advise from the wise benevolent priest which of course solves all of her attitude problems. The performances are all very earnest and sincere although the younger actors are a bit stiff. The music sort of alt-folksy by Paul Mills swells in all the right places to signal when one should feel teary eyed. The movie will probably play well with church groups or on the Lifetime Channel.
(Review by reesa)