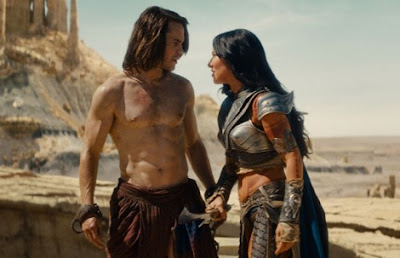 Edgar Rice Boroughs who also wrote Tarzan created an 11 volume series from 1912-1948 about the planet of Barsoom, his fanciful name for the planet Mars. This is a live action film debut for director/writer Andrew Stanton (WALL-E, Finding Nemo) and co-written by Mark Andrews. The story is based on the first book A Princess of Mars which introduces the hero John Carter, a former Confederate Captain during the Civil War who having lost his family during the war and is down on his luck obsessed with finding gold.

Friday Night Lights hottie Taylor Kitsch plays John Carter who is transported to Mars after fighting a strange robed person in a cave while looking for gold. He wakes to find himself in a desert environment and he has the ability to leap long distances due to his bone density and the gravity of the planet. He soon realizes that he's not in Kansas or anywhere else that might be familiar when he discovers a nest of hatchlings that are soon to harvested by their parents the four armed Barsoomian warriors. Their leader Tars Tarkas (Willem Dafoe) takes the white worm Carter as an oddity back to the tribe when he sees Carter leap. He's given to Sola (Samantha Morton) who seems to be an outcast in their community. She gives Carter a drink that gives you the ability to understand languages. This also helps the story move along because we are introduced to human like Barsoom inhabitants of Thark and Helium who are at odds for the battle of the planet. The Tharks are being aided by the immortal Holy Therns who like to manipulate the rise and fall of populations. They have given the Prince of Zodanga, Sab Than (Dominic West) a magical tool that is helping him wipe out and subdue most of the cities. He makes a deal with the Jeddak of Helium Tardos Mors (Ciarán Hind) that he will leave his city be in exchange for marriage to his beautiful daughter Dejah Thoris (Lynn Collins). Dejah is not only a scientist, but handy with a sword. Boroughs must have been pretty enlightened to have created such a bright and capable female character back in 1912. Carter's abilities and his attraction to the princess forces the solider to takes sides in the epic battle that is soon to come.

From the trailer this has all the markings of being another over bloated cheesy Disney adventure but director Stanton creates characters that fit this genre without overkill. The Barsoomians at first reminds one of Jar Jar Binks but the appearance is all there is to it. There's a lot of Star Wars themes going on, but then Lucas was also influenced by Borough's stories. The unexpected hero who suddenly comes in to save the world and gets the princess. The humor from the fish out of water element seems natural and not set up like slap stick. Instead of space raiders there are flying ships that work from solar power. The art direction is filled with steam punk style references with cranking gears and watch type parts. It's an exciting and unexpected pleasing way to spend 2 hours and 12 minutes and still think there should be more. The adventures that Carter has to experience to try and find a way home doesn't feel like an episodic game set up as each step in his journey follows seamlessly. The caliber of actors involved like Mark Strong as the leader of the Therns, James Purefoy as Kantos Kan the captain of the Xavarian, Bryan Cranston as Powell a Civil War colonel help keep the scifi tale moving without going over the top. It's a cool space opera with swords in an old fashioned epic story when quick cut CGI explosions and super heroes are the usual fare. OK to see in 2D but 3D would be better.
(Review by reesa)