Wrath of the Titans 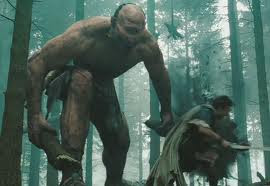 Considering the horrible 2010 Clash of the Titans the sequel doesn't instill much hope for the franchise. This time around Jonathan Liebesman (Battle Los Angeles) is at the helm working with a script by Dan Mazeau and David Johnson (Red Riding Hood). Another adventure in useless 3D spending less time battling weird creatures, although it has it share, but this time around with more character and story that is not muddled with mythology.

Ten years after Perseus (Sam Worthington) saved the world from the Kraken, he's living quietly in a small village as a widowed fisherman with his son Helius (John Bell). Zeus (Liam Neeson) his father comes to ask for his help as the gods are losing their power from humanity's lack of prayers to them. Their hold on the Titan Kronos threatens to destroy the world unless they use their collective power from the gods half human children. Perseus doesn't want to get involved with the battling gods and turns down his father although there are ominous signs of a coming apocalypse such as some two headed dragon type creatures attacks the village. Plus Zeus's son Ares (Édgar Ramírez) double crosses his father with his Uncle Hades into making a deal with Kronos for immortality. Ares has always been over come with the human trait of jealousy has no qualms about having Kronos siphon off his dad's god power.

Queen Andromeda (Rosamund Pike) was once a princess when Perseus saved her and is now getting her troops ready to battle the evil forces that are accumulating when Perseus the hero comes riding in with Pegasus. Poseidon (Danny Huston) had delivered the news about the Hades/Ares alliance. He uses his last bit of power to charge Perseus to find his demi-god son Agenor (Toby Kebbell) and give him the trident. Poseidon tells him he would need Agenor's help to get into Tartaus to free his dad. Agenor is under the Queen's arrest having stolen the crown jewels. Together they find Hephaestus (Bill Nighly) the “Fallen One”, who was once a god now a bumbling fool that talks to the mechanical owl (the nod to the 1981film Clash of the Titans) to help them transverse the labyrinth to the abyss of Tartarus to save Zeus and stop Kronos from ending the world.

What made Clash of the Titans so tiresome was the convoluted story, the over indulgence in episodic monster attacks, and the really bad use of 3D. It was just loud and unexciting until the battle with the Kraken. This time they built on the relationships between Perseus and the gods with their sons which is vast improvement over than the first film. The battles don't have that blurry quick cutting so you can enjoy two headed dragon, the family of cyclops in a trap filled forest, the labyrinth of moving walls like the moving rooms in Harry Potter only made out of stone and the mountain sized Kronos looking like he's made of molten lava. Add the warrior queen who isn't just the token woman role by looking competent and believable.

Worthington looked buff and hard in the first film, but now looks more like a suburban dad who has to step up to the plate. Neeson and Fiennes ramp up the ham and the beards as the battling brothers who have to forgiveness with each other. Maybe it's because the first movie was so bad that in comparison it makes Wrath of the Titans looks so much better. It's not worth the 3D glasses, but worth the popcorn.
(Review by reesa)

Email ThisBlogThis!Share to TwitterShare to FacebookShare to Pinterest
Labels: Wrath of the Titans review