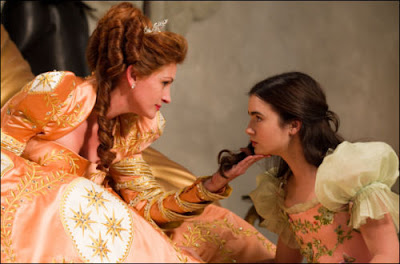 Julia Roberts is such an iconic actress that just her name alone sells movie tickets. You also know what to expect. The big teeth smile, the twinkle in her eye, and the loud laugh. The thought of having her play the evil queen in the Grimm's classic fairy tale of Snow White would normally have one scratching their heads in wonder. Director Tarsem Singh who also did The Cell, The Fall and Immortals uses his unique visual style in this treatment with comic effect from a screenplay by Melissa Wallack and Jason Keller. The snide snappy dialogue couple with the outrageous costumes (may battle Hunger Games attire) make for an irreverent take on the source material.

Bigger than life Roberts plays the wicked step-mother of Snow White (Lily Collins) whose father the King disappears while battling black magic that has appeared in his kingdom. It's the Queen herself generating the bad mojo and after 10 years the place has gone to hell in a hand basket. The only way to get out of the mess is to marry someone rich. Snow is considered a major threat to the queen's beauty so she is kept locked up and the people think she's deformed. The queen constantly reminds Snow of her inability to rule, how she's totally annoying with that black hair and all. Despite her horrid upbringing by Mommie Dearest, Snow remains kind hearted. On her 18th birthday she slips out of the castle and to see for herself what's going on. She cute meets a traveling prince who was attacked by some giants that later turned out to be dwarfs who the prince mistakenly insults. Hence is in a half naked state and hanging upside down when he meets Snow. Prince Alcott (Armie Hammer) eventually encounters the queen who when she discovers he's rich decides he will be her next husband. But the prince is too smitten by Snow so the queen orders her secretary Brighton (Nathan Lane) to take her out of the palace and kill her or leave her to the monster that haunts their surrounding woods. Brighton as a favor to the king who always treated her well, lets Snow go and she meets the dwarfs. Not the Disney named miners of the cartoon, these guys are Napoleon, Half Pint, Grub, Grimm, Wolf, Butcher and Chuckles. They once lived in the village, but the queen outlawed “ugliness”. Now they are outlaws and thieves. When they steal the queen's taxes, Snow takes it back to the people and turns the dwarfs into heroes.

The queen, the prince, the dwarfs and Snow eventually battle it out. There's some spells, there's the land of the magic mirror, there's some inventive spa treatments, there's a wedding, and wooden corsets. It's eye candy with familiar faces like Mare Winningham, Michael Lerner, and Sean Bean popping up. Lily Collins (Abduction and daughter of rock star Phil Collins) is lovely in the light weight role of the perfect princess who finds how to stand up for oneself. She is so sweet you expect the birds to fly on her fingers singing happy tunes. Arnie Hammer does the comedic turn as the square jawed prince who finds himself under a spell of puppy love with the queen. Nathan Lane is his frenetic self as the queen's assistance. But the movie is all about Julia Roberts who plays evil with a delight and sarcasm that is not menacing. In fact she instills a slight air of loneliness with the object lesson being that what you put out will come back to you three fold. Mindless entertainment that happily is not in 3D.
(Review by reesa)