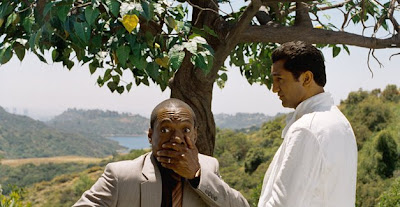 The convoluted road to release this 2008 Eddie Murphy project was exacerbated by the split between Dreamworks and Paramount, the ebbs and flow of Murphy's career, and a bad case of timing. Director of Norbet and Meet Dave Brian Robbins and writer of Jack and Jill Steve Koren probably didn't help either. Murphy plays a fast talking book agent who will do anything and say anything to make a deal. That is until a mysterious Bodhi tree appears in his yard shedding leaves every time he speaks. When the last leaf leaves then so will he.

Painted in broad strokes and primary colors, Jack McCall could have been played by Jim Carrey or any other rubber faced comedian. Murphy exaggerates with his typical slapstick humor like his old school comedy verging out of control. McCall talks so fast even his therapist can't get a word in edgewise. He sweet talks his wife, his co-workers and his clients oblivious to anyone's agenda but his own. That is make the deal, make money, be a big shot so he can brag to his mother (Ruby Dee) who is suffering from dementia and mistakes him for his father.

He aims his skills on getting the sought after new age guru/healer Dr. Sinja (Cliff Curtis) to sell his book to his company. Infiltrating the yoga clothed acolytes meditation group Jack fakes seeing the elusive blue pearl of enlightenment just to worm his way into convincing Dr. Sinja of his “sincerity”. Jack gets his deal, but when he comes home the Bodhi tree at the Ashram on which he cut his hand suddenly shows up at his house. Jack notices that the leaves fall with each word he speaks. Sinja tells him he will die if the remaining thousand leaves are gone. Jack must go through his daily routine of work and family by not saying a word.

Caroline (Kerry Washington) his wife is tired of Jack's lack of communication regarding their relationship and makes assumptions when he's not willing to tell her what she needs to hear. She moves out with their baby. Even Jacks' assistant Aaron (Clark Duke) confesses all sorts of wrong doing by Jack's guilt inducing silence. Aaron even ruins impeding deals and Jack's job when he tries to imitate Jack's sales style by trying to act like him or what he thinks is like him in his stead. The silliness of Murphy miming is what propels the movie and story. If the one note concept of keeping one's mouth shut isn't enough, Jack is forced into reacting to everything that's done to the tree like squirrels, watering and spraying pesticides. The characters around him continue with their lives apparently not questioning his odd behavior with any seriousness. Jack must find the truth of Sinja's “life is a journey” platitude if he's going to save his life.

Light weight in a Sunday night television movie sort of way that is amusing and somewhat entertaining. It will probably be at Netflix soon.
(Review by reesa)

Email ThisBlogThis!Share to TwitterShare to FacebookShare to Pinterest
Labels: A Thousand Words review