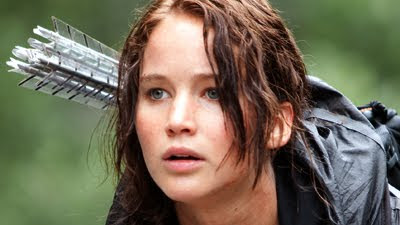 The dystopian world that Suzanne Collins created for her characters is centered in a futuristic United States which is now called Panem and where the population is limited to 12 districts. Each district is responsible for the different needs that are supplied to the Capitol which is located in what was known as the Rocky Mountains. There used to be 13 districts, but one of them rebelled unsuccessfully. Because of this each district must hold a raffle to choose one boy and one girl between the ages of 12-18 to participate in the Hunger Games. This is a competition of 24 children who must fight to the death and the population is mandated to view it on television. The winner is honored with gifts, food and supplies. Supposedly this reminds the districts that a price has to be paid to keep future wars in check. Pretty heavy subject matter for a book aimed at young adults. But it proved to be wildly popular and two more books followed.

Seabiscuit and Pleasantville director Gary Ross directed and co-wrote with Suzanne Collins and Billy Ray into a script that gives the movie version a coherent and successful interpretation. Obviously the book lovers will notice certain changes like characters missing, lack of back story for key characters, none of the angst filled commentary and the story pared down to just important scenes. Despite those few changes, the film runs quickly in it's 143 minute running time. The costumes and makeup stand out in a good way with a sharp contrast of the poor 30's style districts and the over the top puffy haired, extreme makeup and ornate dresses of the Capitol.

Jennifer Lawrence may have gotten flack when first cast as Katniss Everdeen the resourceful survivor in her Winter Bone's Appalachia District 12 but on screen it's a good fit. She looks like she could illegally hunt beyond the fence that's forbidden territory for game meat with her best friend Gale Hawthorne (Liam Hemsworth) to trade for necessities. After she lost her father in a mining accident, her mom couldn't pull her self out of depression so Katniss became mother and father to her younger sister Primrose (Willow Shields). When the day of the “reaping” comes her 12 year old sister's name is called so Katniss volunteers to take her place. An unusual event for the poorer districts as the rich districts train certain children to volunteer who are called “careers”. Also chosen is the baker's son Peeta Mellark (Josh Hutcherson) who harbors a secret crush on Katniss since they were kids.

The affluent difference in the lifestyle in the Capitol where all the “tributes” are taken is for some reason supposed to impress the teens. Instead it makes Katniss uncomfortable as her team which includes their drunk mentor Haymitch Abernathry (Woody Harrelson), shallow PR handler Effie Trinket (Elizabeth Banks) and endearingly normal stylist Cinna (Lenny Kravitz) try to make her likeable to garner sponsors and support. They deck them out in fancy clothes, schooled on manners, and fed opulent meals. The hype that surrounds the annual carnage has turned into a holiday type of atmosphere in the Capitol but a day of tread for the Districts. The whole affair is MC'd by slick Caesar Flickerman (Stanely Tucci) on the screens encouraging all to put on a good show. Their tag line is “Happy Hunger Games, may the odds be ever in your favor”. The teens are given 2 weeks of training and then set out onto the game fields where the Gamemaker Seneca Crane (Wes Bentley) manipulates the environment and the players to make for better TV advised by President Snow (Donald Sutherland) who claims the games give the district just enough hope to keep the status quo.

There's no way to avoid the violence but the scenes are fortunately quickly cut and most of the horrific scenes in the book are toned down. After all the audience for this film are the same Twilight tweens and perhaps their parents. Team Gale or Team Peeta doesn't come into play here. You are only given a hint that the handsome Gale cares more for Katniss than just friends, and Peeta is someone who did her a kindness in the past she can't forget. The boys aside this is very much all about Katniss. Her constant narrative in the book is replaced by Lawrence's interior performance, her athletic prowess and her natural attractiveness.

This is nothing like Asian cult film Battle Royale where classmate are set up to destroy each other except for the prickly subject matter of a world where one has to sacrifice their children as a show of control over the populace. It may be hard to take, but there's a serious lesson there about avoiding a totalitarian future. Katniss' s determination to win if only just to see Gale and Prim again, and Peeta's desire to live and die on his terms and not for the games give the tributes an edge not expected by the Capitol. Added to the movie is a hint of the coming rebellion that's covered in the sequels. This is a satisfying film treatment for fans of the books series.
(Review by reesa)