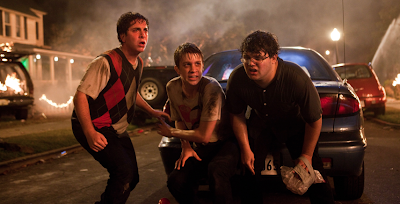 Project X is loosely based on a house party in Australia when a teenager posted his address on MySpace attracting around 500 people which caused over $20,000 property damage. Producers Todd Phillips (The Hangover) and Joel Silver selected Nima Nourizadeh for his feature film debut. It is written by Matt Drake and Michael Bacall the story centers around three teenagers who document with a video camera a house party that goes wrong. Casting for the film was done nationwide by allowing any US resident to audition through their website. The wanted unknown real people to keep the production budget low. The beginning of the movie starts with a thank you for all the found footage contributed to make the movie and an apology to the Pasadena Police Department.

Thomas, Costa and JB (Thomas Mann, Oliver Cooper, and Jonathan Daniel Brown) are seemingly anonymous high school students who want to make a name for themselves by throwing the ultimate party with Dax, (Dax Flame) the mostly unseen videographer recording everything. It's Thomas' birthday and his parents anniversary. They are going out of town and leaving the house and dog in his care. His dad has a list of reminders, which like most teens goes in one ear and out the other. Mom is feeling a little apprehensive, but dad reassures her that he doubts anything will happen because frankly their son is a loser. The three friends are practically invisible at school. With Costa's encouragement Thomas' guest list is to include some hot chicks because as he blatantly explains and not in these terms he plans to get some kitties this night. Kirby (Kirby Bliss Blanton) is a hot blond but she is considered like one of the guys and is an old friend of Thomas. Kirby and Thomas' relationship is the only thing going that has semblance to an actual normal storyline to tie the mayhem together.

Awkward gawky Thomas is easily seduced by Costa's promise that if he throws a great party it will elevate his status in the school. Why this kid hangs out with this rude Brooklyn fast talking over confident jerk who unceasingly peppers his conversations with stupid sexist language is the real mystery of this movie. The third party in this trio is JB who is a chubby dumpy teen who just follows along with anything. The wishy washy Thomas has no backbone to stop the party as is quickly gets out of control. Turns out that Costas not only texted the party to everyone, but it ended up on Craigslist and on the radio community boards. The comfortable North Pasadena upper middle class suburban home quickly becomes overrun with wantonly excessive teens and arrested developed adults whose main function is to use and abuse in a free for all in the elusive goal of “party”.

It's hard to understand why these male dominated slob-comedy movies continue to be produced. Three clueless young men who just want to get drunk, have sex, and not think of the on consequences maybe the usual right of passage for teens of any era. But this over-the-top and beyond homage to the biggest baddest party ever will freeze the hearts of most parents and will only encourage some doofus youngsters to want to create their own party to end all parties. There maybe some amusing moments in the film, if you are not completely burned out by the shaky hand held camera gimmick, stupid for the sake of stupid and you enjoy rubber necking train wrecks then this movie is for you.
(Review by reesa)