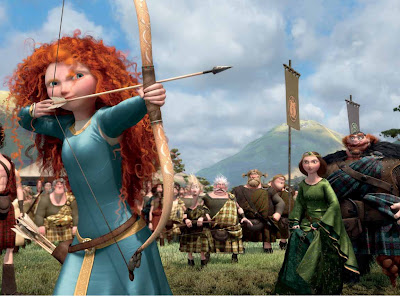 Pixar completely rewrote their animation system for the first time in 25 years. The complex visuals is what gives their new fantasy adventure film a more pictorial splendor. The film directed and written by Mark Andrews and Brenda Chapman the first woman to ever direct a Pixar movie, along with writers Steve Purcell and Irene Mecchi. Pixar also includes a cute engaging short called La Luna directed by Enrico Casarosa. Mostly young girls will enjoy this new Disney princess but it doesn't have the same appeal of Wall-E, Toy Story or Up that entertained the adults as much as the kids.

Princess Merida (voiced by Kelly Macdonald) is a red headed curly topped young lady who is chaffing at the collar under Queen Elinor's (Emma Thompson) tutelage on becoming a proper lady and leader of her country. Merida would rather roam free practicing her archery. She is more like her big burly dad Fergus (Billy Connolly) the king of the four clans. He's obsessed with catching the giant bear that took his leg. Tradition say the four clans must gather to decide who will become Merida's marriage suitor. The first born of each house must compete for her hand. Each of the clans, Dingwall's, MacGuffin's and Macintosh (Robbie Coltrane, Kevin McKidd and Craig Ferguson) offer up less than suitable contenders. Merida's insistence that she is not ready to be married falls on deaf ears and she's competes on behalf of herself just to keep from being mated. Elinor locks her in her room and the angry Merida slashes a tapestry of her family before escaping to the woods. She meets a bear obsessed wood working witch (Julie Walters) who gives her a cake that promises will change her mom. Only thinking of getting her mom to change her mind about the wedding, Merida feeds it to Elinor who instead becomes a bear. The witch gives them 2 days for Merida to figure out a riddle or her mom will stay a bear forever.

It's not usual for Disney movies to feature relationship issues between a mother and daughter with the mother involved in a major way. They are usually like a side note that propels the young woman to find her own truth. In this case both mom and daughter have to find a way to communicate and appreciate each other. Even the witch is not your typical evil doer or scary. She's more mischievous and does give Merida a solution that requires her to actually amend herself to save her mom. Merida's three little brothers play more like the three Stooges as they help their bear mom and sister will be fun for the young boys that will be dragged to see this with their sisters. The only scary part for kids is the clueless dad doesn't recognize his wife as a bear and only wants to kill her. Otherwise the uplifting message is against the grain of typical princess stories with the girl getting her guy. In this case Merida fights for the freedom of finding someone for love and not tradition. Which is the modern Disney way of influencing young people's minds.
(Review by reesa)