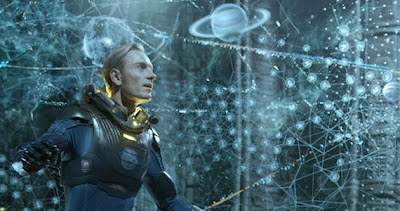 In Greek mythology Prometheus is a titan, a champion of mankind who fashioned humans our of clay and stole fire from Zeus to give to the mortals. In the new Ridley Scott film, Prometheus is a ship that is travelling to deep space in search for the beginning of life. Serving as a prequel to his 1979 film Alien, with screenwriters Jon Spaihts (The Darkest Hour) and Damon Lindelof (Lost) give a satisfying origins story that will hopefully re-boot the franchise after the disappointing Alien 3 and 4.

In the year of 2089 on the Isle of Skye in Scotland, Noomi Rapace of the Swedish version of The Girl with the Dragon Tattoo taking on the tough Ripley type of female lead Dr. Elizabeth Shaw and her partner Charlie Holloway (Logan Marshall-Green) have discovered a series of ancient pictographs from various time periods that are identical. It leads them to believe this is a invitation to find them. Weyland Corporation the omnipresent big brother from the series is footing the trillion dollar bill for the expedition that departs in 2093. The crew of 17 that includes scientists and ship personnel set off in suspended hibernation for two years, two months, and 15 days before they reach their destination, the moon LV-223. Except for David (Michael Fassbender) the android who uses the time to monitor the dreams of it's sleepers, ship controls, learning languages, and watching movies. He seems to style himself after Peter O'Toole.

Michael Fassbender's impeccable mannered robot who obviously has his own agenda on this mission is outstanding. His precise and calm demeanor is like Alien's Bishop, but less friendly. They have obviously made improvements to the model. Charlize Theron is the Weyland representative on the ship, Meredith Vickers who is skeptical of the purpose of this trip. Idris Elba is Captain Janek who's only concern is the safety of the ship. Guy Pearce plays Weyland who hopes to find the secret of immortality, his only reason for paying for this party. Noomi Rapace is not as bad @ss as Ripley or even Lizbeth Salander, but she's still a strong level headed character that opens up the dialogue of balancing her scientific mind with her spiritual beliefs.

What they discover there will be familiar to fans of the Alien movies at the same time answering questions and filling in those blanks while opening the door for more mysteries. The “engineers” as Dr. Shaw calls them may have indeed seeded Earth, but just what exactly is the purpose of those canisters of facehuggers? What happened to the crew of engineers who are now just holograph records? Granted there may be some holes and worrisome continuity problems with the already established Alien lore. It's not jump out of your seat horror like the original movie, or guns a blazing like Cameron's space marine homage in Aliens. The creepy factor is just as cool and visuals are outstanding with it all layered with the eerie original musical score by Marc Streitenfeld. The 3D effects are well used and not annoying as in most movies. It seems to enhance the already claustrophobic atmosphere of the underground tunnels and space ship corridors. While those who already dislike sci-fi films will probably not enjoy this,Alien fans will look forward to the sequel of this prequel, and if or when Ridley Scott will do another Blade Runner.
(Review by reesa)