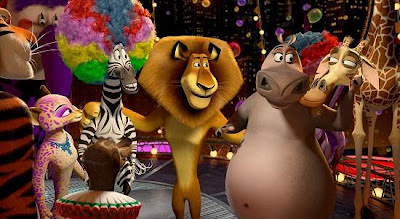 The zoo animals are back for another adventure this time in a circus that they hope will bring them back home to New York City. Directors Eric Darnell, Tom McGrath and Conrad Vernon take on the animated characters in Africa where they last seen in the second film. Writers Eric Darnell and Noah Baumbach works the amusing animal dialogue that is easy for kids, tolerable for adults story of friendship and the importance of where you hang your hat is home.

Ben Stiller voices Alex the lion, Chris Rock is Marty the zebra, David Schwimmer as Melman the giraffe and his girlfriend Gloria the hippo voiced by Jada Pinkett Smith. They are still stuck in Africa after the penguins flew off with the monkeys. Tired of waiting for them to return from Monte Carlo, they decide to swim there. It's a cartoon...just go with it. Once in France their antics comes to the attention of the animal control Captain Chantal Dubois (Frances McDormand) playing a version of the Dalmatians Cruella de Vil. Only Ms. Dubois hopes to hang the lions head on her wall of trophies. She's formidable foe who chases them to a train yard where they seek shelter on a zoo train, the Circo Zarcoza. The animals won't help unless they are circus animals. Of course Alex lies and says they are because although they were not technically circus, they did entertain. They are told that a famous promoter will see them perform in England and decide if they will get a contract to tour America. Alex and friends think this is their way to get back home. The penguins using their casino winnings buys the circus. But their first performance is so bad they are forced to stop and reconsider. The main star of the circus was the Tiger Vitaly (Bryan Cranston) who used to do the impossible trick of jumping through insanely small hoops until one day it didn't work and he lost all confidence,. It's up to Alex and friends to restore his nerve and get them all home. All the while Capt. Dubois is on their tail.

The bright colors, the universal theme of family, friendship and home with lessons on telling the truth and believing in oneself are important to children audiences. There's nothing here to offend, except it's in 3D. Just a fun movie with plenty of eye candy that will entertain your little ones. Probably not so much fun on DVD, so go borrow a kid if you want and take them to the movies.
(Review by reesa)