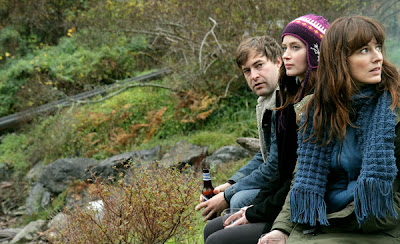 Jack is in a funk. He's not working, he's not happy. Tom his brother died a year earlier and at the remembrance thrown by his brother's friends, he manages to ruin the love fest by dragging everyone down with his negative attitude and an increasingly hostile toast. Tom's girlfriend Iris suggests that Jack go to this island village where her family has a cottage. No one will be there, no cell phone, no Internet, nothing but peace and quiet for some reflection and to get his act together.

Taking his funky red bike, back pack and tent, Jack (Mark Duplass) boards the ferry to one of the Washington state islands with it's scenic wooded vistas. He arrives at night and discovers Iris's half sister Hannah (Rosemarie DeWitt) is also there. She just broke up with her lesbian lover of seven years. After bonding over some late night tequila they challenge each other for what turns out to be the least appealing sexual encounter. The aftermath is made even more uncomfortable when Iris decides to show up under the pretext of checking up on Jack while Jack more than Hannah try to cover up any evidence of their one night stand. Duplass has the harder job of trying to make something out of Jack who is a pretty formless individual. He keeps Jack from being just another a-hole by his articulate quick wit and self depreciation. The women have an easier job with their natural camaraderie. The whispered conversations in bed between them are lovely and endearing. The three stuck in a remote cottage who become captive audiences for each other's agendas and the secrets that they try to keep will ultimately blow up in their faces.

Lynn Shelton's improvised script came from the idea vault of the Duplass Brothers. Originally it involved a mother and daughter but it fortunately evolved into a interesting, amusing and awkward relationship story of two sisters and a guy. The actors, Mark Duplass, Emily Blunt, Rosemarie DeWitt and Mike Birbiglla were all credited as script consultants as the movie team worked at hashing out characters and situations. In fact Shelton basically edited the story into existence from a 70 page out line and hours of improv'd scenes. The synergy of the story relies heavily on the chemistry of the actors who spent months preparing except for DeWitt who came on to the project four days before the 12 day shoot began. While not much happens in the way of any action sequences, the movie is filled with stunted conversation including stutters, stammers and reactions like real life. The camera focus is on the faces and the internalized turmoil. It's like visiting people you don't know and rubber necking an accident scene but in a fun way.
(Review by reesa)

Email ThisBlogThis!Share to TwitterShare to FacebookShare to Pinterest
Labels: Your Sister's Sister review