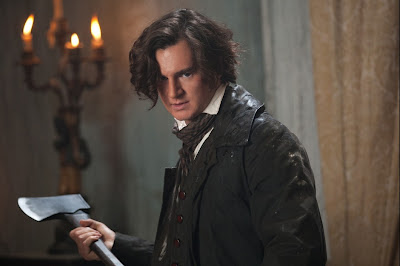 Literary mash-ups (the art of combining genre's) is so five minutes ago but it's made it's way to the big screen. Russian director of Day Watch and Wanted Timur Bekmambetov and writer Seth Grahame-Smith (based on his book published in 2010) tackle the 16th President of the United States utilizing his famous ax as a vampire weapon of destruction. Grahame-Smith took painstaking effort to make the fantasy horror film as historically accurate as possible. Between Lincoln's vamp slaying, it also examines the life of the man and not just the legend he has become.

The story starts when Lincoln was a child and a vampire mortally bites his mother while Abe was watching and he swears to a life of vengeance. Years later Abraham (Benjamin Walker) meets Henry Sturgess (Dominic Cooper) who helps him channel that anger into power in which to fight the vampires that inhabit the world. He trains him into a life he calls a higher calling and silver coats his favorite ax before sending him out into the world. Like Nikita he lives like a normal person until he receives intel from Henry on hidden vampires to take out. Although he promised Henry that he would devote his life into eradicating the world of blood suckers he becomes smitten with the lovely Mary Todd (Mary Elizabeth Winstead) who is engaged to Stephen A. Douglas (Alan Tudyk). Working as a store clerk with Joshua Speed (Jimmi Simpson), Abraham lives a double life courting Ms. Mary and talking politics. Abraham's activities comes to the attention of the lead vampire Adam (Rufus Sewell) whose lackey Jack Barts (Marton Csokas) was the vamp that killed Abe's mother. Adam who's clan uses the slaves in New Orleans as a food source follows Abraham's rise to power as a possible stepping stone on taking over the US for a vampire nation by supporting the southern rebels. With the help of his store keeper boss and his child hood friend Will (Anthony Mackle) a free black man whose mistreatment influenced Lincoln's hatred of slavery formed his principal advisors. Lincoln who decided to fight with words instead of the ax must now wield it again.

There's plenty of super cool battle scenes from a horse stampede, trains, Civil War battlefields all shot in 3-D. The team uncovered actual 3-D images from the era during their research and Bekmambetov thought it was a way to bring people in the middle of the action. Visually the film slightly tinted is interesting and the use of 3-D actually enhances rather than annoy. Costuming to set decoration are also stimulating to the sense of time and space. All the action is balanced with discussions of the issue of slavery. It's all played out with a certain amount of seriousness. There's even a bit about Harriet Tubman's Underground Railway. Sewell's Adam doesn't sneer or snarl playing the vampire leader with a world weariness and an arrogance of power. Cooper's Henry who harbors secrets of his own tries to guide Lincoln on his quest to stop the vampires knowing he can't stop the man. Walker looking like a young Liam Neeson will inspire a lot of Halloween costumes and people trying to mimic his ax twirling. The film bogs down through some of the historical bits and some of the slo mo blood spurting will seem been there done that. Overall it's a fun, over the top, eye candy with a little bit of patriotic spirit for the 4th of July.
(Review by reesa)