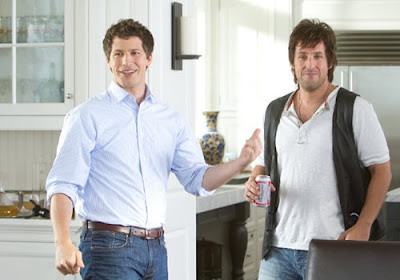 One is either a fan of Adam Sandler movies or they are not. His last outing playing brother and sister twins in Jack and Jill won the Raspberry Awards as THE worst movie of the year. What redeems this film is that he didn't write or direct it and it also stars Andy Samberg. Directed by Sean Anders (Sex Drive) and written by David Caspe (TV's Happy Endings) tells the story of an arrested developed father who reconnects with his son who changed his name and works as a financial whiz on the eve of the son's wedding.

When Donny Berger was young he gained notoriety for having wanton sex with his hot math teacher Ms. Mary McGarricle (Eva Amurri) who later becomes pregnant and gets sent to prison. Donny's escapades apparently feeds into the male ego that someone young like him could bang his teacher. The Van Halen song comes to mind. He's hailed as a hero which the media frenzy makes him famous with interviews, tours, talks, and even a TV show. Donny (Adam Sandler) as an adult is a washed out 80's has been who never broke out of the fast, hedonistic lifestyle and is now broke. He's got to come up with $43,000 to pay back taxes or he's going to jail. With his last $20 he bets on a fat guy to win the Boston marathon. Then he searches for his son who has become Todd Peterson to avoid being associated with Donny and to avoid his real name of Han Solo Berger. He shows up at the house of Todd/Han's boss Steve (Tony Orlando) where the wedding is being held and introduces himself as his son's best friend who he had rescued in an elaborate story which in reality would never be believed, but everyone thinks that Donny is a hero. His celebrity also makes him interesting to everyone except for Todd who tries to get rid of his father. He felt traumatized as a child who was overweight from being fed a steady diet of coke and cake and getting tattooed with New Kids on the Block on his back which is not distorted from growing up.

Obviously the heart of the story is of forgiveness and redemption between the father and the son. How it gets there can at times be hilarious and annoying. The supporting players like Milo Ventimiglia of Heroes who plays Chad the Marine garbed brother of this bride Jamie (Leighton Meester), James Caan as the fighting priest Father McNally and Vanilla Ice as himself offer up the most laughs. There's the running gag of Donny pulling a beer out of the most unlikely places Most of the time you can fully understand why Todd wants to avoid his dad who doesn't seem to improve as the movie goes on. It was a nice but expected to see Susan Sarandon play the grown version Mary as Eva the young Mary is her real life daughter. The last 15 minutes were probably the funniest in the whole movie, but most of the film was filled with potty mouth, dumbed down to the lowest common denominator humor. So if this is what you want for a movie, knock yourself out. Adam Sandler fans with buy tickets no mater what.
(Review by reesa)

Email ThisBlogThis!Share to TwitterShare to FacebookShare to Pinterest
Labels: That's My Boy review