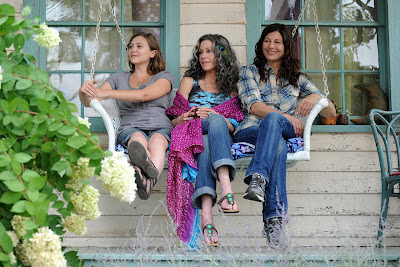 Nothing says hippie mama like Jane Fonda, right? During those formative years in the late 60's Jane was about as far away from the hippie lifestyle as one could get back then outside maybe a tweak of fashion. In this new film by director Bruce Beresford Jane plays an old flower child still living in that alternative hippie dippy universe in Woodstock, NY who reconnects with her uptight lawyer daughter and meeting her grandchildren for the first time. The script by Christina Mengert and Joseph Muszynski soaks this formula story in tie dyed, war protesting, organic farming stereotypes while characters wallow in their inabilities to communicate and love one another as the Grateful Dead plays in the background.

Diane (Catherine Keener) is a suit wearing sour faced lawyer who is informed by her lawyer husband Mark (Kyle MacLachian) that he wants a divorce. Her teenage son Jake (Nat Wolff) thinks it's about time, while college age Zoe (Elizabeth Olsen) is having a hard time coming to terms with the family breaking up. Diane decides to spend the weekend with her mother Grace (Jane Fonda) who she hasn't seen in 20 years who lives in a time warp as an artist and pot farmer in Woodstock. Diane asks her mom to tone down her free loving activities while the kids are in the house, and warns her kids not to eat the brownies. She gets vexed when Grace takes the kids to the weekend war protests where tie dyed garbed, poster waving, drum playing chanters fill the town square. At the after party at Grace's house Diane is introduced to Jude (Jeffrey Dean Morgan) an furniture maker who was intrigued when Diane pulled her kids from the protest. In fact, the kids also make a love connection with vegetarian Zoe and Cole (Chace Crawford) the ethical butcher and Jake with coffee house waitress Tara (Marissa O'Donnell). Then everyone has a misunderstanding and unresolved issues with each other. Everyone goes to their separate corners before coming back with forgiveness and acceptance. All the while Grace is reciting poetry and new ageisms.

There's even a moon worship circle as the local women howl and drink tequila. Rosanna Arquette shows up here as one of the revellers. Grandma Grace shows the kids her pot growing room and the kids get high from 2nd hand smoke of her bong. Diane gets frisky with Jude. Jude tries to get her to “let go” of her anger. Jake records everything with his camera making a movie with no set plan or idea. Avant garde according to Tara. Zoe has to realize that her perfect mate may actually have different ideas than she does and that may not be a bad thing. And Grace really shouldn't let chickens roam her house and furniture.

It looks nice, the actors are great, Grace's costumes are a hippies dream, the farm house is funky and shabby chic, the story...well the story has been done before a million other times and done better. There is not one thing about this story that rings true. It's only pleasant to watch, Jane is just beautiful, you can't stop looking at Elizabeth Olsen, Catherine Keener is as always fascinating. Three powerhouse actresses and the story just wastes their talents. There is nothing unexpected, nothing surprising, nothing that you will remember 30 minutes after you leave the theater. It's like being a tourist visiting Woodstock and giggling over the quirkiness.
(Review by reesa)