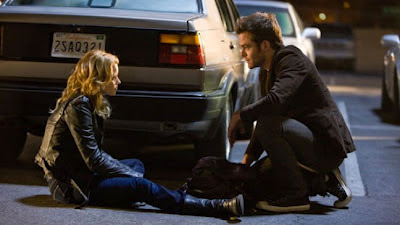 Alex Kurtzman had first met his half sister when she introduced herself at a party. This started the seeds to his story which he wrote with his writing partner Roberto Orci and their college friend Jody Lambert. To give the atmosphere it's unique look it was shot in some of the more off beat sections of Los Angeles to give it a Southern California feel without falling for obvious landmarks. Kurtzman who is more known for writing action movies like Star Trek, Cowboys and Aliens and Mission Impossible III tries his hand at a more personal and intimate story of troubled souls for his directorial debut.

Chris Pine plays Sam a fast talking New York sales guy who is somewhat ethically and morally annoying. He screws up a deal that makes the Federal Trade Commission get on his case. His boss (Jon Favreau) is close to firing unless Sam can make it right. In the middle of his crisis he has to go home to Laurel Canyon for the funeral of his record producer father. Sam makes himself and his girlfriend Hannah (Olivia Wilde) miss their flight on purpose so he doesn't have to attend the actual ceremony which peeves his mother Lillian (Michelle Pfeiffer). Hoping his inheritance will get him out his jam with the FTC, he is miffed to discover his father only left him his vinyl record collection. Even more vexing is a shaving kit bag stuffed with $150,000 and instructions to deliver it to a certain address. Which of course he doesn't do it because he's more than tempted to keep the money for his own uses. By this time Hannah becomes fed up with Sam and goes back to New York.

Sam using his dad's red vintage convertible begins to stalk the residents of the notes address. He finds that Franki (Elizabeth Banks) is a bartender and has a troubling precocious 11 year old son Josh ( Michael Hall D'Addario). He befriends Josh then later Franki, still unaware of their connection to each other. He eventually finds out from his mother a one time Joni Mitchell wannabe who met his dad back in the day of Laurel Canyon's magic music days. The secret she's carried all these years was close to a breaking point for her. Now the burden is on Sam who by this time is so intertwined with Franki and Josh that Franki is almost thinking of him as a potential lover and father figure for his son. It's almost creepy and one wonders how they get themselves out of this corner and why Sam lacks the backbone to come clean.

Pine is effective as the brash and self centered young man with daddy issues who has to learn responsibility and forgiveness. Pfeiffer has just gotten more beautiful as she gets older infuses Lillian as a forlorn but strong willed woman who thinks she did what she did to keep her family together. It's Elizabeth Banks who as always gives Franki some color and personality. She's got a been there done that attitude that she uses to keep emotional involvements in check. Being a mom keeps her centered and grounded when everything else is just hanging from a thread. The story which is paper thin and obvious is held together by the sensitive performances which gives this more backbone than a Lifetime movie.
(Review by reesa)