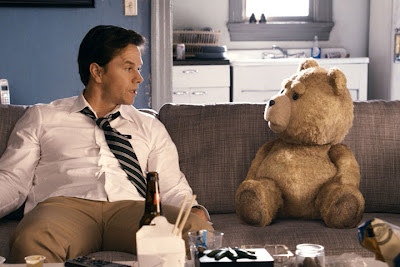 John Bennett was a lonely child until he received a big stuffed bear for Christmas. He made a wish that his bear could talk to him and they would become best friends forever. That wish came true and 27 years later he's 35 and still BFF with his animated bear friend Ted. Family Guy's Seth MacFarlane directed, wrote with Alec Sulkin and is the voice of Ted. The male characters are your stereotypical Beantown bromance boys who talk smack, watch Flash Gordon, drink beer and smoke weed. So don't let the cute stuffed bear fool you, this is not a movie for kids.

Mark Wahlberg may have spend years trying to get rid of his Boston accent, but it now pays to go back to his roots. He plays John an emotionally stunted adult who works for a car rental agency, that is when he remembers to show up to the job. For some reason he's managed to be in a steady relationship for the past four years with Lori (Mila Kunis) but she thinks that it's time for John to grow up and choose between her and Ted. Fortunately their chemistry works enough to make their romance believable. John realizes that he would be lost without Lori, so he helps Ted find a new apartment and a job at a supermarket where his rudeness is only appreciated by the manager. Separation anxiety gets the best of them and John becomes easily sucked in to Ted's immature antics. Even the night of Lori's big company party thrown by her smarmy boss Rex (Joel McHale), John is lured to Ted's place because his hero Sam Jones (as himself only bigger and better) is there. That's the last straw for Lori who kicks John out of their apartment.

There seems to be a rash of movies dealing with arrested developed adults written in the supposedly natural voices of real people. What makes this one different is the stupidity that's usually prevalent and mind numbing to make one uncomfortable and erase brain cells is saved from the sympathy for all the people and stuffed bears involved. Even the “bad” guys Donny (Giovanni Ribisi) and his spoiled son Robert (Aedin Mincks) who want to have Ted as their own are just sorry needy individuals. Rex who wants to date Lori tries to out manno John by showing off his boys with toys memorabilia collections. Even John and Ted who try to hang on to each other as “thunder buddies” who have their own song to ease the fear of God's farts are endearing. The bawdy behavior and language keeps this firmly rooted in risqué not for TV type of ratings. It's not exactly offensive, just tiresome because do we really need to go there to make it funny? Over all it's amusing and different, well worth the popcorn and keep the kiddies at home.
(Review by reesa)