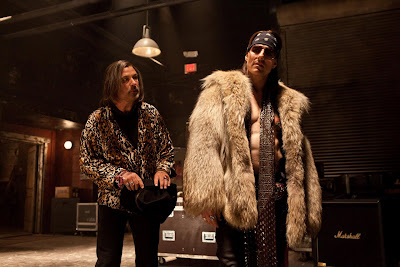 Take all your favorite classic rock hits from the 80's, throw them in a hat and draw a bunch out then build a story around them. That's what Rock of Ages feels like. Featuring songs from Styx, Journey, Bon Jovi, Pat Benatar, Twisted Sister, Steve Perry, Poison, REO Speedwagon and other well known rock bands that are easy to sing along with while watching the movie. Adapted from the 2006 stage musical it is directed by Adam Shankman (Hairspray) with a screenplay by Justin Theroux, Chris D'Arienzo and Allan Loeb featuring Tom Cruise in the Brett Michaels role of rock god Stacee Jaxx and he does his own singing.

The story starts in 1987 with Sherrie Christian (Julianne Hough) traveling from Oklahoma to Los Angeles to become a singer. But her belongings are stolen including her prize record collection. She cute meets Drew (Diego Boneta) who works at the Bourbon Room a popular nightclub run by Dennis Dupree (Alex Baldwin in a long haired wig) and his right hand man Lonny (Russell Brand). She gets a job as a waitress there and falls in love with Drew. Meanwhile the club is getting ready for a big night because Stacee Jaxx is coming with his band Arsenal in his last performance before he embarks on a solo career. His manager the oily Paul (Paul Giamatti) is having a hard time getting Stacee to get on stage much less make it to the theater. Stacee is the typical narcissistic rock performer who is so famous and worshiped by the fans that he's beyond reality. When he eventually makes it to the Bourbon room he is interviewed by rock journalist Constance (Malin Åkerman) who calls him on his shortcomings before eventually succumbing to his charisma. Meanwhile Patricia Whitmore (Catherine Zeta-Jones) the wife of the the LA Mayor Mike Whitmore (Bryan Cranston) is rallying the church ladies to get rid of the Bourbon Room to eliminate the bad element that threatens the young people.

OK, take this gist of the story and insert musical interludes of the characters singing rock songs that describe the feelings of each scene. Because it's the 80's there is a lot of sexually suggestive dancing, posing and language. Cruise fashioned after Axel Rose struts with his bare chest thrust out like a peacock looking more creepy than sexual even with the bare backside shot. Hough and Boneta are charming as the two love birds. Their journeys from new love, to breaking up when Sherrie works as a pole dancer at the Venus Club with owner Justice Charlier (Mary J. Blige) and Drew getting reimaged by manager Paul as a singer in a boy band then they reunite in a Journey song. Russell Brand who is usually annoying in most movies is amusing paired up with Alec Baldwin and they steal the movie from the flashier scenes.

Not sure how this compares to the actual stage play. It just seems too long at times. If your radio dial is set to light FM then it will be a good time. And it does leave you with a Glee type song to sing along when you leave the theater.
(Review by reesa)

Posted by Dallas Movie Screenings at 1:43 AM

Email ThisBlogThis!Share to TwitterShare to FacebookShare to Pinterest
Labels: Rock of Ages review