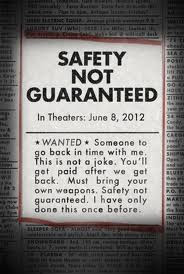 This movie is based on a 1997 Backwoods Home Magazine classified ad asking for a partner in time travel. It made it's way around the Internet eventually turned into Safety Not Guaranteed which won the Waldo Salt Screenwriting Award at the 2012 Sundance Film Festival. Directed by Colin Trevorrow and written by Derek Connolly the film is everything that you want or expect from a independent feature, and then some. At times it seems it wants to go in that typical quirky spin but it inevitably turns out to be more that what you expect.

Aubrey Plaza of Parks and Recreation plays Darius a loner, disaffected, unambitious and slightly depressed young woman who lives with her father and can't even get a waitress job because she's not considered a “quality hire”. She spends her days as an intern at Seattle Magazine where she is treated with no respect by the editor Bridget (Mary Lynn Rajskub) and has to stock toilet paper in the bathrooms. During a brainstorming meeting Jeff (Jake M. Johnson) suggests a story about this classified ad for someone looking to time travel and asks for a couple of interns ...the lesbian and the Indian to accompany him. They travel to Oceanview where Jeff's obnoxiously attempts to contact the ads' author which only makes the subject annoyed and wary. Darius is more effective and gets Kenneth (Mark Duplass) to start testing and training her for their mission. Amused at first, Darius begins to have fun and in some strange fashion connects with the person that everyone finds looney. Meanwhile Jeff is using this trip to reconnect with Liz (Jenica Bergere) his first love from high school. He also badgers the other intern Amau (Karan Soni) a biomedical student who only wants to beef up his resume by working for the magazine that he should lose his virginity.

Kenneth is sort of paranoid about people watching him, but he's a sweet loner who awkwardly trains Darius on his homemake obstacle course and teaches her to shoot guns. He even uses Darius as an accomplice in stealing some laser equipment. Although she's winning Kenneth's trust she doesn't come clean with her agenda. Duplass and Plaza work wonderfully off each other as their doubt and trust ebbs and flows with the smalls truth each is willing to impart. The dialogue seems more like improv with it's mundane cadence and sarcastic nuance. The secondary stories of Jeff and Amau which fill half of the movie don't really offer a lot to the time travel idea, but their characters are funny and vulnerable. This film could have taken some easy ways, but it always surprises and worth to stick around to see if that time machine really does work.
(Review by reesa)

Posted by Dallas Movie Screenings at 1:53 AM

Email ThisBlogThis!Share to TwitterShare to FacebookShare to Pinterest
Labels: Safety Not Guaranteed review