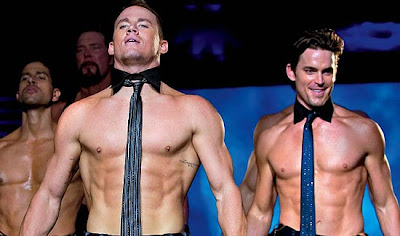 It was Channing Tatum who suggested to director Steven Soderbergh the concept of a movie about male revue dancers. Tatum had some experience in this line of work before he started being the biggest star going today as the largely female audience of advance screeners can attest. One screening had the added bonus of the appearance by performers from the Dallas hotspot La Bare in attendance giving the crowd a chance to get up close and personal with the buff, smooth butter soft skinned mansome talent. Really wanted to ask the dancers what they though of Tatum's portrayal of their craft and what it is that motivates them to do what they do on stage. Because watching this movie will not answer those questions.

Tatum plays Magic Mike, a self made entrepreneur, who has lots of businesses going from mobile detailing, construction and building costume furniture from found items. He works his other jobs during the day, but at night he hustles ladies in the neighboring clubs to bring to their act. He enlists the help of 19 year old Adam (Alex Pettyfer) who he met on the construction site having got that job from Craigslist. Adam once a promising athlete now sleeps on this sister's couch (Brooke played by Cody Horn). Mike sees potential in the handsome, but aimless young man and convinces the club owner Dallas (Matthew McConaughey) to give him a job. After watching the dancers do their acts to an enthusiastic audience of screaming women, Adam finds himself on stage being told to strip.

It's mostly all in good fun. The camaraderie of the dancers Ken (Matt Bomer), Big Dick Richie (Joe Manganiello), Zorro (William Levy), Tarzan (Kevin Nash) and Tito (Adam Rodríguez) is easy and carefree. Their backstage conversations are just rumblings without any purpose while the lead actors try to advance the storyline. There isn't any extravagant Flashdance choreography here, more g-strings and rip off pants stuff while strutting their hairless muscles and six packs. Tatum shows off his impressive moves, and more power to him The other guys as good looking but they are only get brief nods, which will hopefully be expanded in the DVD version.

The gist of the story includes Dallas wanting to move the club to Miami from Tampa promising his protégé Mike who he brought into the club some 6 years before a larger piece of the business. Adam has to answer to his big sister Brooke who is suspicious and wary of Mike yet charges him to watch out of him. The seedier side of the life is touched on when Adam gets caught up some drug dealing. And the wanton sex and drinking that keeps Mike from moving on becoming a more responsible adult. The clunky script by Reid Carolin of why this particular lifestyle is so attractive to these men is obviously the money because all we see is the surface of these characters and nothing else that motivates them.

Tatum expands his repertoire to include stuttering and in-articulation. McConaughey rocking the butt-less chaps does well as the jaded and confident leader of the pack. The weakest link is Cody Horn as the Magic Mike love interest. There's more chemistry with Mike's bed buddy Joanna (Olivia Munn). The curiosity factor and the bridal party get together's will fill the audience for this but you will get more bang for your bucks at La Bare's.
(Review by reesa)