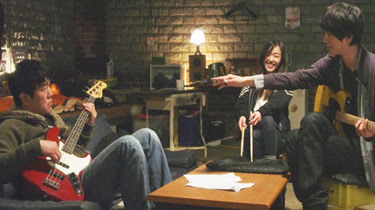 The full day of programming for the 2012 AFFD opened with a South Korean film directed by Koo Ja Hong. It tells the story of a low level government employee who works for the Environmental Department that takes care of waste management, noise pollution, and snow plowing. Sitting in little cubicles the office workers endure complaining citizens and leveling fines. It's not glamorous, thankless rewards, doesn't pay overtime, but it's stable work for the rest of your life. It's not a place for someone with dreams or ambitions.

Han Dae Hee (Yoon Je Moon of The King2Hearts Korean drama) is a 38 year old employee who prides himself in being calm and efficient. He's the best at writing reports and dealing with the constant barrage of unhappy callers. One such caller demanded that the band practicing in their building needs to stop. He visits the site and coolly tells them they have to find another practice place. A real estate acquaintene of Dae Hee overhears the conversation and offers the kids a place of these people who are out of the country. After coming up with the large amount of deposit and moving their stuff over they return to find the guy ripped them off for their money and their instruments. Blaming Dae Hee because he knew the guy, he feels guilty and lets them use his basement. But he gets more than what he bargined for with the constant noise. When the band breaks up, he talks them into doing it with the remaining members, only they need a base player and suddenly he finds himself recruited.

Han Dae Hee is a bit of a know it all. He's stiff, unyielding, while remaining a aura of authority which rubs most people the wrong say. He tell the young band that he hates music, but has a great knowledge thanks to his older brother's vinyl collections in the attic. From the years of working in his dead end job, he's challenged by the band in their spirit, energy and their ability to see through him. He develops a friendship with Min Ki (Sung Joon of Shut Up Flower Boy Band) while being taught to play the bass. He thinks he can learn everything by books and his imagination of what a bassist should be like.

What is really nice is the small look into the Korean indie music scene which is often overshadowed by the K-Pop music world of boy and girl dancing acts. The music is catchy and garage like with the performers real voices. While the ending sort of meanders with nothing tied neatly, it is a light hearted, pleasant and amusing journey as Han Dae Hee gets to open up and look at the world with a little bit more rock and roll. 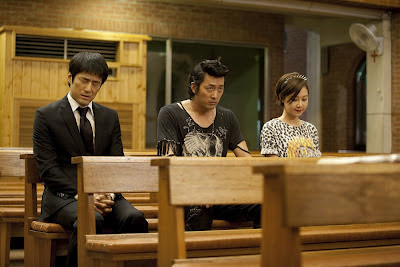 Directed and written by Jeon Kye Soo the South Korean rom com stars two popular Korean actors, Ha Jung Woo (The Chaser) and Gong Hyo Jin (The Greatest Love). Although the script was completed in 2007 Jeon Kye Soon had difficulty in getting it started as industry insiders considered the material to be too difficult for the general public. Later the film was touted as being a male “Bridget Jones”. There was some negative feedback from the female audience members at the advanced screenings. It's unusual to have such a off beat and mainly male perspective on the issue of love and relationships.

Gu Joo Wol has been working on his 2nd novel for 2 years and has yet to finish it. It's gotten to the point where his characters are complaining. Joo Wol's alter ego is the private investigator in his novel played by Lee Byeong Joon. He's often see lurking and advising the under confident writer who is stymied by a serious case of writer's block. His publisher director Kwak (Jo Hee Bong) wants him to write a serial story for his tabloid paper and to come with him to Berlin for a book deal. It's in Germany that he meets Hee Jin (Gong Hyo Jin) and is quickly smitten. When they get back to Korea he sends her flowers and a letter that peeks her interest. Soon Joo Wol who was never lucky in relationships finally finds his muse.

What makes this movie so refreshing is the interesting slant on the way Joo Wol approaches finding love and the strength of the female character who isn't submissive or starry eyeid. She's a full fleshed woman of intelligence who doesn't put up with Joo Wol's insecurities. She's also a photographer who likes to take pictures of naked men. There's a whole running joke through the whole movie about Hee Jin's unshaved armpits because apparently they don't shave in Alaska. When Joo Wol breaks down and eventually writes the serial for the tabloid, his story is called the Hairy Lady. There's music in this too because Joo Wol's other job is working at the Yellow Submarine where the house band rocks out with more Korean indie music. Also look for Ji Jin Hee as Joo Wol's older brother Gu Joo ro.

Joo Wol is a great character who is a bit of a sad sack. Even his friends advise him to get a girl friend. His quick love with Hee Jin is bound to crash and burn because men often lose interest when faced with a serious relationship. Plus Joo Wol gets caught up in not being able to accept Hee Jin's past love life.
Its a little too long, but it's fun and interesting. 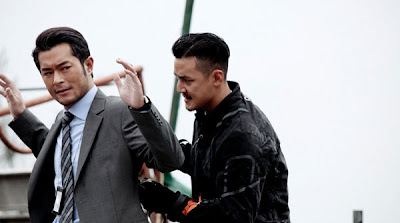 The 2011 Hong Kong crime thriller is written and directed by Alan Mak and Felix Chong. It's not really a sequel to the 2009 film Overheard where the same actors play different roles and storyline. The white collar crime involves stock brokers and is often confusing as to the set up early in the film. There's just a feeling that the people involved are up to no good.

The movie starts out with a car chase with a Ferrari and a van through the crowded Hong Kong streets. The ultimate crash leads the Captain Jack Ho (Louis Koo) of the Securities Force to find the victims car was bugged with a military grade devise. Manson Law (Lau Ching Wan) a high powered stockbroker says he doesn't know why hes being bugged, but confesses to his wife that we was being followed. He reports this incident to this private club of stockbrokers who say that the incident has to be reported to Tony (Kenneth Tsang) a super rich guy who seems to pull everyone's strings. Ho's investigation is complicated by the “Landlord's Club” noncooperation. The eavesdropper Joe (Daniel Wu) is a devoted son to his Alzheimer's mother living in a nursing home. It's unclear why he has access to the police computer but Joe is able to stay one step ahead of the police but maybe not ahead of the henchmen Tony has sent to take him out.

The unveiling of the complicated plot by Joe against the Landlord Club is slowing peeled away by Ho and his team. Ho is also distracted by the release of his wife from jail as she was sent there by him when she started to use her clients money to get herself out of debt. Although it's bogged down by financial gobbly gook it does make some buying and selling of stock sort of interesting only because you know someone is going to get rich or ripped off. The car chases and especially the motorbike case is especially exciting. Don't let the money part get in the way of this intriguing story. 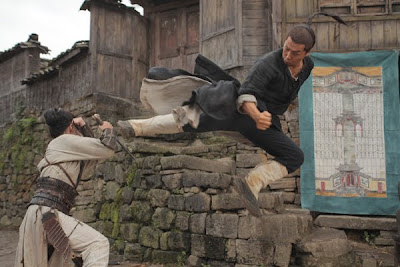 No one makes a better martial arts movie than Donnie Yen. Directed by Peter Chan and written by Oi Wah Lam this film is like a classic kung fu film. Donnie Yen is also credited as the action director in which as one friend informed is fairly accurate in the southern fighting style.

The film opens with Yen as Jinix a family man who is the gentle paper maker. When he's fixing the paper windows of a local merchant, two thugs come in and terrorize the shop keepers. Hiding behind a wall, he only reacts when it looks like they are about to kill the shopkeeper's wife. He latches onto the bad guy and the movie rolls with an exciting and imaginative fight scene. Jinix is hailed as a hero by the village, but Detective Xu (Takeshi Kaneshiro) is 1917's answer to CSI decides that the only way that Jinix could have won is with martial arts. He is like a dog with a bone in trying to uncover Jinix secret because he believe s there no way for a mild manner paper maker could fight and kill 2 most wanted criminals. His investigation leads him to uncover Jinix's past despites everyone's advise to let it go. A past that was better left alone
.
The inventive shots of how Wu is deciphering the crime scenes and his though processes makes the narration from his point of view. Wu gives himself acupuncture to subdue his tendency for empathy that had caused the death of the parents of a young runaway. Jinix tries to show Wu that his destiny with Wu is karma. That one cannot avoid that events that led them together. When Jinix's secret is finally revealed, the last battle scenes are old school. It's an epic battle as Jinix will do everything to protect his family. It's a tribute to the old B movie afternoons in Chinatown.
(Reviews by reesa)

Posted by Dallas Movie Screenings at 12:33 AM