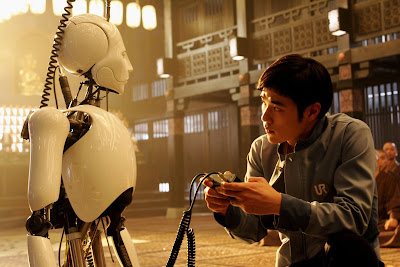 A science fiction anthology of three unique stories of human self destruction in the modern high tech era told by South Korean directors Kim Ji woon (The Good, the Bad, the Weird and I Saw The Devil) and Yim Pil sung (Hansel & Gretel). The project was originally planned to be directed by Kim, Yim and Han Jae rim. The filming began in 2006 but shortly after Kim and Yim finished their sequence they lost financial backing and the third part called “A Christmas Gift” was never shot. After a new investor was brought in, Kim and Yim decided to collaborate as directors of a different third story.

A Brave New World
Directed by Yim Pil sung
The family of a lab researcher takes off on a vacation leaving him home alone with a list of chores. One is to empty the trash and recycle. Seok wook is repulsed by the garbage he has to remove. An apple with a rotten hole fascinates him. The apple ends up in a processing plant with all the other biodegradable material which in turn ends up being used for cattle feed. On a date at a BBQ place with his girlfriend, Seok wook takes a bite of some raw liver and is surprised to pull out a piece of apple skin. While kissing his girlfriend in the park afterwards, a couple of punks begin to mess with him and he gets beat up and begins to puke. Suddenly he's mixing it up with them and spits on the face of one of them. The night goes on when suddenly people are showing signs of an infection. The newscasters at first call it a flu, then like most zombie movie it falls into chaos quickly. Asian zombie movies don't seem to follow the same tropes and clichés as typical undead stories. This story seems to be symbolic for Eden and the apple infected by cooperate garbage. There's a Genesis quote after the story about the tree of life.

The Heavenly Creater
Directed by Kim Ji woon
This is an existential yarn about a laborer robot that achieves enlightenment. A service tech is called to a monastery in to check out their RU series robot that is supposed to clean and give tours. Besides his duties the robot begins to listen to the teachings with the other monks and is soon mediating with them. The head monk just wants to make sure that whatever the robot is doing is not due to defect. The tech does his diagnostic and determines that mechanically the machine is working without the normal perimeters. Because the robot is showing abnormal behavior by his expanded consciousness, the tech has to call it is to his superiors. This brings in the head honcho who arrives with the extermination team then declares that this particular model has previously shown unusual behavior, Interesting thought provoking discussion ensues about the meaning of life. The special effects are note worthy in this episode. And there's this thing with a mechanical pet dog.

Happy Birthday
Directors Yim Pil sung and Kim Ji woon
A young girl makes a dent in the 8 ball for her billiard obsessed father's pool table. Using her KAIST uncle's computer she finds a replacement ball for 10 cents which she orders online. At that same time her uncle had just came home and said he just say a UFO. Min seo throws the bad 8 ball out the window when her father walks in. The ball rolls down the steep street before landing in a hole with these weird lights take it.

Fast forward 2 years later and the big news is that a massive collision is expected. Earth will soon collide with a 10 km meteor soon. Min Seo's parents and uncle get ready for the apocalypse by filling a bunker basement with supplies, a greenhouse, and exercise bike generators. Min seo watches the newscasts that get increasingly foreboding where even the announcers are depressed and the weather girl says there's no weather, A close up of the meteor is revealed to be a huge ball with some strange writing on the side. Min sea realizes that the numbers on the ball is her birth date. She confesses to her parents about ordering the pool ball and tries to get them to believe there is some connection. They think she's nuts, but her uncle begins to believe and they try to cancel their order.

It's an interesting and curious group of stories that work really well together as a whole. But as with all short films it only serves to wet the appetite for something more substantial. Hopefully we will have Kim Ji woon's English language debut called The Last Stand someday soon.
(Review by reesa)

The last day of AFFD and I'm sated and pleased with the quality of the films screened during the festival. Unfortunately I didn't get to see everything, but what I did get to review was a great mix of genre's from many countries covering a wide variety of subjects. To the Asian Film Festival of Dallas, Thank You! Hopefully I'll get another opportunity next year.