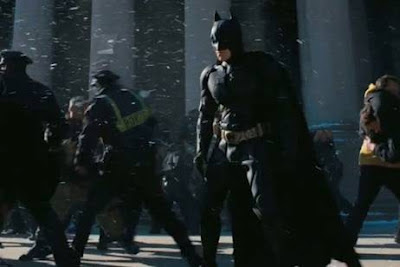 The long anticipated end to Christopher Nolan's Batman trilogy comes to an end with The Dark Knight Rises which he wrote with Jonathan Nolan. Christian Bale is back as Batman recovering for the wounds he sustained and believing the city no longer needs his services. Set eight years after The Dark Knight when Batman took responsibility for the crimes committed by Harvey Dent so that the city could gain hope by believing he as a hero, finds Bruce Wayne walking with a limp and living as a recluse in his Wayne Manor. As the city is memorializes Dent's legacy of the Dent Act that has reduced crime in Gotham, a new villain is taking up residence in the city sewers.

Anne Hathaway dons the skin tight costume as Selina Kyle the cat burglar that surprises Bruce Wayne by stealing his mother's pearls from his personal safe. But it seems the pearls were not what she was after. The mask wearing Bane (Tom Hardy) has been leaving a trail of crime behind him takes up residence in Gotham's underground building an army of thugs. He gets a hold of Commissioner Gordon's speech in which he had planned to clear up Batman's reputation by telling the truth. Gordon (Gary Oldman) promotes rookie patrol officer John Blake (Joseph Gordon-Levitt) who is a true believer in Batman, and he reveals to Bruce that he's wise to the man behind the mask.

Somewhere along the way Wayne loses his fortune and Wayne Enterprises, which he put in the hands of Miranda Tate (Marion Cotillard), a executive board member who encourages him to rejoin society. Michael Caine is back as the faithful butler Alfred who only wishes that Bruce will return a whole human being who is ready to settle down with a wife and family. When Wayne decides to take up the mask again, he doesn't stay to watch. Lucius Fox (Morgan Freeman) who runs Wayne Enterprises on Bruce's behalf still retains the armory and keeps an eye on their special project of a nuclear reactor that can be used as a source to power a city for free.

There's a lot of stuff going on in this story. It has to cover a lot of ground to set up Bane the new nemesis that has the metal grill on his face in which he must breathe that makes his voice low and distorted but not quite like Darth Vader. How he stands up to Heath Ledger's iconic Joker will have to be discussed on forums for the months ahead. The reason for his attack on Gotham to set up the city in a complete state of anarchy is slow to reveal. In the meantime there are some action packed confrontations between the two masked men. And as with all comic based movies, the bad guys always seems to keep one step ahead of the good guys and their nefarious ways seem impossible to overcome until the very last minute. The 2 hour and 45 minute running time goes quickly as it fills the eyes with Nolan's visual mastery and attention to detail.

Hathaway's Catwoman fortunately stays away from the purring sexuality of her predecessors. Her Selina is a firm believer in self preservation and puts out a somewhat cynical attitude. Her quick banter with Bruce promises a worthwhile collaboration in the future. But considering that Nolan says this is the last of the series, it will be hard to recapture that chemistry for another adventure. There will be those who will diss this entry but so what. It will be a close fight between The Avengers for supremacy of the summer blockbusters this year. The Dark Knight Rises closes this series with a satisfying sigh.
(Review by reesa)