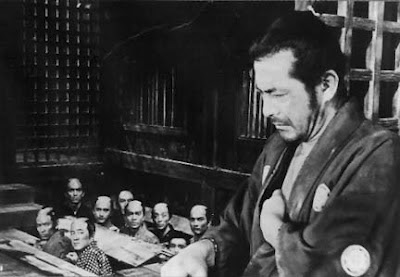 Akira Kurosawa's 1962 black and white samurai movie starring Toshirō Mifune was written by Ryuzo Kikushima and Kurosawa. It was based on 'Shūgorō Yamamoto's short story Peaceful Days which was re-imagined with an anti hero by the studio once again using Mifune as the ronin in tattered robes. Not as meticulous as Yojimbo, this film is more fun and relaxed.

A group of young clan men want to root out the corruption in their clan. They are worried that their chamberlain Mutsuta and the ring leader's uncle tore up their petition. The nephew went to the superintendent Kikui who reassured him that he would take care of it and to meet them that night. A homeless samurai sleeping in the other room suddenly comes out and points out the flaws in their logic. Like the only reason why they are not willing to believe in the chamberlain is because he's ugly and the superintendent is not. When he finds out that they were supposed to meet there he senses an ambush. The men begin to believe him when they notice they are surrounded. He manages to get them out of the jam then they finally deduce that the chamberlain is probably in trouble. By the time they get the chamberlain house been taken prisoner and expected to write a confession that he is corrupt and perform seppuku. They manage to save the chamberlain's wife and daughter who make Sanjuro uncomfortable. The wife also tells him “You're too sharp. That's your trouble. You're like a drawn sword. Sharp, naked without a sheath. You cut well. But good swords are kept in their sheaths.”

Set in Japanese occupied Manchuria in the 30's, director Ning Hao has crafted a fanciful story about a young fast talking hustler who is not below stealing from the church or starving children. Xiao ends up in jail with a revolutionary and becomes in possession of some valuable information regarding a shipment of gold. He tries to sell the information to the rebels and insists on joining their gang. Working as a driver for an actress who also leads the revolutionaries that want the gold takes them to a party at the home of the bank president. Xiao crashes the party and tries to steal the silver but his caught by the president's daughter. His addled father who tagged along to eat the food almost ruins the rebels plans.

There's so much going on in this bank heist, romance, action adventure that's funny and violent. The Japanese are not shown in a good light with the colonel of the occupying force playing sadistic games with suspects at a movie theater, then shooting random people. Xiao hides out in a church by pretending he's a Christ figure on a cross. Xiao also gets beat up constantly by the cops, the army, and the rebels. Meanwhile there's a film being made by the president's daughter that Xiao is romancing, but then maybe he's just using her. His character is so unlikeable at times, and yet he's very close to his father.

It's not a perfect movie, but it's good for a few laughs. There's tanks, a big vat of acid, beautiful CGI cityscapes and vintage cars. The costumes are inventive and colorful. The movie itself rates an “interesting” worth the rental at Netflix. 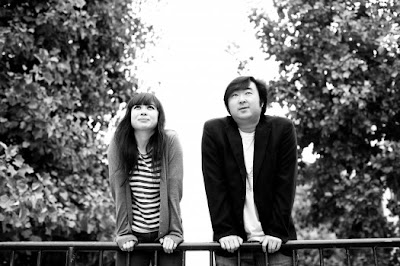 Dave Boyle's follow up to festival favorite Surrogate Valentine brings back musician Goh Nakamura's adventure looking for love. Director Boyle liked the way Goh and San Francisco looked in black and white for Valentine continues the palette which serves to enhance the mood of Goh's sad sack state of mind. The film shot in 15 days features original music by Goh and fellow musician Yea Ming the lead singer of the band DreamDate.

Goh playing himself as a successful indie musician playing clubs with only himself and his guitar finds himself broken up with long time professor girlfriend Erika (Japanese actress Ayako Fujitani). She tells him one night on Skype that sends Goh into a major funk. As he's getting ready to move from San Francisco to Los Angeles to embark on a long concert tour he meets Yea Ming Chen at a going away party for him. They seem to click but she doesn't give him her phone number just so their next meeting will seem more magical. Anyway she's going to be playing in Las Vegas for her next gig. His cousin Mike (Michael Aki) comes to stay with him as he's going through a divorce. He's got a reputation for things going “bonkers” and his plan to drive Goh to LA via Las Vegas to see his love connection promises that it's not going to be smooth sailing. According to Mike he's got to live his life with assertion, deception and distraction.

Goh who helped write the script paints a perpetually vexed person who has to deal with his love disconnect, a rebound fling that maybe can't pan out because it is a rebound, his stuff stolen, physical injuries and ultimately has to make a choice. The journey to LA is fraught with trauma to the already down and miserable Goh. Mike is the glue that keeps him from spiraling down to complete self pity. Amusingly Goh's music is the theme song for an anti depressant commercial. Later he writes the music for a pet food commercial that is sung by Dave Boyle. The ending keeps the story going for perhaps a trilogy in this series that will hopefully find some happiness for our hero. 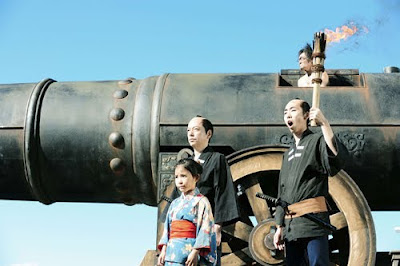 The centerpiece film for the festival features a funny imaginative film by Hitoshi Matsumoto. The film starts with a lone figure running through the woods with a urgency of someone following. He's out of breath, his kimono in tatters and disheveled, he wears black round eye glasses. Following him is a young girl who looks at him with impatience and regret. They continue on their path at a slower pace. When they reach a foot bridge a beautifully dressed woman with a musical instrument is going the opposite direction. Just as she passes by her instrument reveals a knife which she slashes the man. Instead of falling from his wound he runs away even faster. The little girl tends his wounds, and they continue before falling prey to two more assassins, a flamboyant gunman and a chiropractic killer. Each time the girl tends his wounds.

The next village he's arrested by the clan leader. He's given a chance to live he can in 30 make his sou laugh. The little boy has been basically catatonic since his mother died in an epidemic. Each day the samurai has to come up with one act that will elicit a smile. Each time he's commanded to perform seppuku. The little girl encourages her father to just go ahead and kill himself. Afterall he's a samurai without a sword and by rights should just go ahead and die. He harsh word only seems to make him continue with the foolishness. After awhile his guards are helping out with ideas. Somewhere along the way even the villagers begin to cheer him on.

It's the performances that he does that drives this movie. Everything from stomach dances, to putting chopsticks in his nose, solo sumo wrestling, to shooting himself out of a cannon or being a human firecracker. The execution and the wild set ups don't seem to work. Takaaki Nomi in his first ever movie role impresses as the down and out samurai who also lost his wife in an epidemic and like the young prince cannot get a handle on living. It's the strength of his daughter Tae who keeps going. The ending is an expectant dramatic twist, but it also offers hope and a song.
(Reviews by reesa)

Posted by Dallas Movie Screenings at 10:15 AM